When comes to reviewing anything I’m always a little anxious, at the end of the day it’s merely one person’s opinion of someone else’s creative endeavour.

With that said now imagine the thought process when you buy a book written by your younger sister with the intention of reading it and reviewing it.

Actually it came as no surprise to me that this was going to be easy.  I’ve already pointed out I’m biased, it’s my little sister.  But one thing about our family is a belief in true honesty, sometimes that can be harsh but we all respect each other for it.

And with that intro I wouldn’t be surprised if you expected a critical review to follow, that would be impossible. 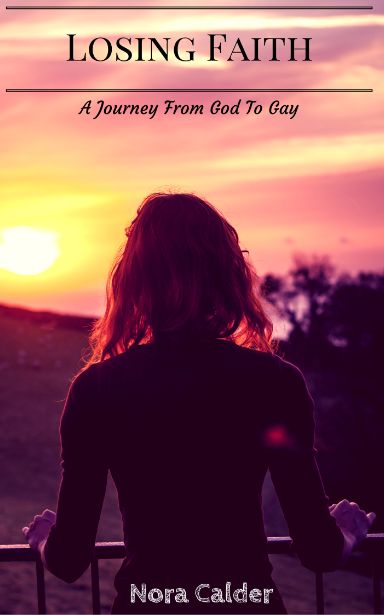 Earlier this year Nora Calder released Losing Faith a lesbian fiction book which addressed the issue of Christianity and Homosexuality.  Check it out on Amazon HERE.

The first thing that really struck me was the professionalism of this book, for a first time self-published author it was very well put together and could easily be placed on any retail bookshelf.

Once inside I will admit I was a little envious, I’ve spent over 10 years writing a novel, it’s still unfinished, and here was my little sister crafting perfect fiction sentences with ease.  The flow of her descriptions was beautiful, it was effortless.  Intelligent writing that was easy to read – that’s a skill in itself.

I was gripped from the beginning, obviously I knew early on where the story was going, I realised what the “un-said” was but still I read with anticipation, I emotionally connected with the moral quandary of the lead character Faith and I became invested in her story.

Nora’s descriptive writing coupled with an interesting and emotive subject matter meant this book kept me engaged throughout.  It’s important to say that I’m not actually a reader, I don’t much enjoy reading so it takes a special book to get me “into it” as they say.  I found myself unable to stop reading at one stage.

Whether you’re interested in lesbian fiction or not I definitely think this is a romance worth checking out.  It’s an easy read but not a simple read.  It’s punchy where it needs to be a beautifully descriptive where appropriate.

For an author so young Nora has a wonderful grasp on not only the English language but also the fiction genre.

And if you think my review isn’t enough to make you check Losing Faith out, have a read at these comments by people who have bought it on Amazon.

Ms. Shauna M. Mcilhennon: “Such a well-written and emotive book. You really feel like you know both Faith & Addison. Can’t wait for the next one Nora :)”

Rachel: “Losing Faith tells the story of not only Faith but of so many other young people out there going through the same thing. I don’t normally read books with religion as a theme but this was more about Faith than her religion. Well written and addictive!”

Jim: “Incredibly moving debut novel about a young woman struggling to come to terms with her sexuality after a lifetime of religious indoctrination. Thoroughly entertaining, would look forward to future releases from this author.”

D Heath: “A journey from god to gay has to be one of the best stories I have read,a well written debut book from a new author,look forward to reading more of her work,well done Nora.”