A BUSINESS incentive scheme dubbed “the new RHI” by environmental campaigners is set to make millions of pounds worth of payments to UK investors over the next 20 years.

And the payments, which are made following the granting of a renewables obligation certificate (ROC) to a facility, are four times higher in Northern Ireland than anywhere else in the UK.

The payments, which can be claimed over 21 years, are for the installation and running of an anaerobic digestion plant.  A facility that converts slurry into methane gas creating energy which is fed back into the main electricity grid.

In an FOI request by Friends Of The Earth Northern Ireland the Department of Infrastructure confirmed there were 179 anaerobic digestion units passed for planning in Northern Ireland with 69 currently in operation.

It is estimated by campaigners, based on information freely available on gas and electricity regulator Ofgem’s website, that each anaerobic digestion unit will be entitled to around £900,000 per year in ROCS payments.

That works out at around £1.3 billion set to be paid out on the 69 currently running over two decades.

Those payments are funded by householders across the UK who pay approximately £200 per year on their household electricity bill to pay for schemes such as this.

In order to run the plants campaigners are adamant there will be devastating effects on the surrounding communities, landscapes, wildlife and local farming industry.

Most anaerobic digesters in Northern Ireland use slurry and grass to produce the energy and highly toxic digestate, the solid matter left over from the fermenting process.

While poultry manure and food waste can be used to feed an anaerobic digester pig slurry is one of the preferred by investors due to the sheer volume that is created by the pigs making it much more profitable.

An increase in large factory pig farms is also part of the government’s Going For Growth strategy.

In 2012 the then Department of Agriculture and Department of Enterprise created the Agri-Food Strategy Board (AFSB) and appointed a number of independent business leaders to make recommendations in respect of the growth targets, strategic priorities and actions to be included in that plan.

Following a consultation period the Going For Growth strategy was created to lay out plans for the “improvement” of the local agri-food industry.

One of the recommendations was to increase the number of sows in Northern Ireland to 53,000 by 2020 which has resulted in a shocking rise in large scale factory farming of pigs across the country.

In the documentary Pig Business in Northern Ireland campaign group Farms Not Factories in conjunction with Friends Of The Earth NI reveal the brutal truth of how Northern Ireland’s growing pig factory industry and subsequently the development of anaerobic digestion plants is having devastating consequences for communities across the country.

He added: “Once we hit the target that would equate to 1,300,000 pigs for slaughter each year which is around 1,100,000 tonnes of slurry being produced per year.

“The numbers are quite phenomenal, that amount of slurry is the equivalent of 12 million people, in a population of 1.8 million.”

In order to feed the anaerobic digestion plants to qualify for payments for the next 21 years investors, of which a substantial number are based outside of Northern Ireland, are setting up large-scale pig factories with thousands of animals in cramped conditions across the country.

Pigs are being kept in horrifying conditions in many pig factories

She said: “These animals are kept in and reared in terrible conditions.  From the sterile condition and concrete slater floors to the lack of bedding, lack of enrichment material and the semi darkness in which they live is disgraceful.

“These animals are condemned to live in a stench of the gases that are coming up from the slurry pit underneath them.

“This Going For Growth strategy is bringing us all down to the lowest common denominator of agricultural produce that I certainly wouldn’t be prepared to eat and I wouldn’t want any of my family to eat either.”

“Much bigger than RHI”

James Orr said the environmental, social and financial impact of factory pig farming and subsequently the running of anaerobic digestion plants on people across the country makes it a “much bigger scandal than RHI”.

He added: “The growth of these already profitable pig factory farms across Northern Ireland is being further bolstered by the massive financial incentives for anaerobic digesters.

“In many cases we have been contacted by campaigners complaining of health concerns, smell, traffic and noise pollution, land and wildlife pollution and highlighting a number of very serious concerns in relation to plants not having things such as a waste management licence, habitats assessment, bio aerosol emissions assessments and pollution discharge.

“Not just that there is a very serious concern around where the highly toxic digestate is going and how often it is being spread.

“With an increased need for hay and grass materials to feed the digesters along with the slurry we’re finding there are also issues surrounding the intensive farming of land and therefore the over spreading which is having a damaging effect on the surrounding landscapes and wildlife, not to mention seeping into the rivers and streams.”

“Tip of the iceberg”

Campaigner Gwyneth McQuiston from Stop The Limavady Pig Factory said this is the “tip of the iceberg”.

“There is much more to this, every time we dig deeper we find more and more evidence to show that factory owners are unlawfully running plants and flouting planning regulations.”

An anaerobic digestion plant at Baranailt Road in Claudy

Gwyneth added: “There is planning in for another 16 pig factories across Northern Ireland housing well over 25,000 more sows which will produce around 750,000 piglets per year.

“It would seem to me that the pig factories are only being set up to feed anaerobic digestion plants which are only set up to line the pockets of investors.

“The Limavady factory was, up until recently the biggest in the UK.”

“Our voice was completely ignored”

Harriet Moore Boyd from Stop The Newtownabbey Pig Factories has also been campaigning for a number of years against an existing pig factory at Monkstown which houses around 10,000 pigs per year.  Her group is also fighting against planning permission which was granted for a pig factory and two anaerobic digestion units at Reahill (17,000 pigs per year) just outside Newtownabbey and Calhame Road which is currently awaiting planning decision.

The unspoiled landscape before the AD factory went into Newtownabbey

She said: “When it came to the planning application for the pig factory and AD Units at Raehill there were 250,000 people online who said they didn’t want it to happen and over 1000 letters written by local residents, which is higher than any objections to anything else in the Newtownabbey area.  Just one person wrote to say they thought it was a good idea.

“Our voice was completely ignored.  It is disgraceful what’s going on, no one has stopped to consider the devastation this is causing to local communities and people who live in the immediate area of the factory or anaerobic digestion plant, or both.”

How the landscape now looks in Newtownabbey

Speaking in the film Pig Business in Northern Ireland former Environment Minister and and Minister for Health Edwin Poots said: “Going For Growth will ensure that you have an efficient industry.  We are in a global market so we do have to be competitive it will look to make farming more efficient and as consequence of that will lead to larger units and pig herds, larger dairy herds and so on, a greater concentration of animal on one farm.”

But James Orr said this is exactly the problem: “This is an anti-farming strategy taking us in the wrong direction for farming.  Northern Ireland has made a name for itself across the globe in good quality farming and this strategy serves to destroy our reputation, landscapes and could significantly affect human health throughout the country.”

This is the first feature in a series of features surrounding intensive factory farming in Northern Ireland and the installation of anaerobic digestion facilities across the country.  Follow the conversation at #PigBusinessNI and don’t forget to use the hashtag if you share.  Please share this far and wide.

If you would like to highlight anything in relation to this special investigation or another story email tina@excaliburpress.co.uk

To hear this article in PODCAST form go to: https://www.spreaker.com/user/10887168/ep-1-pigbusinessni-incentive-scheme-dubbed-new-rhi-revealed 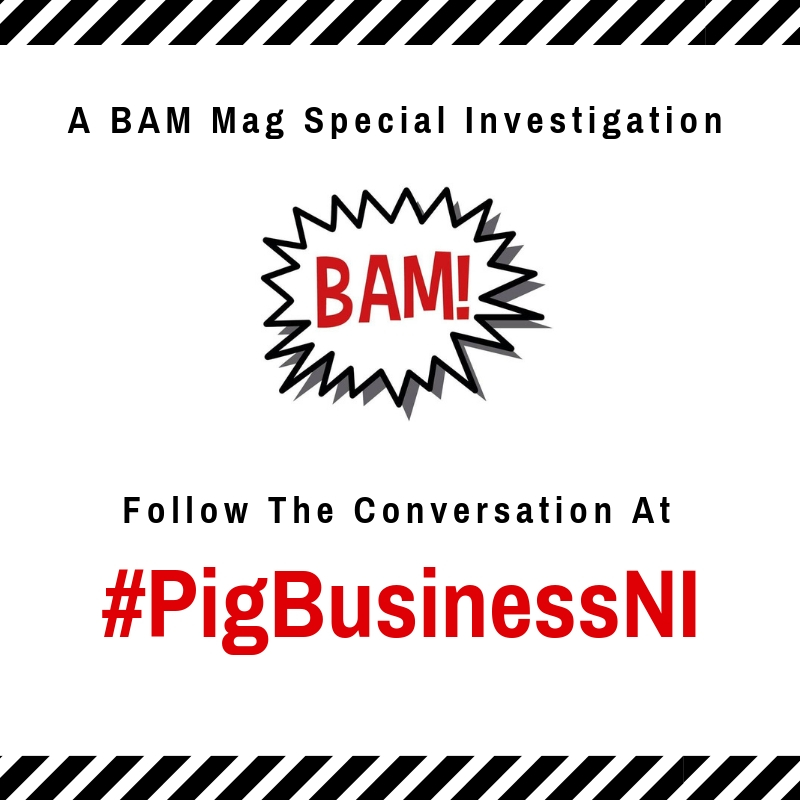