IN just over 10 years DJ Venus has gone from an underground name to a local music sensation.

Known for her quirky style and unique mixes she’s one of Northern Ireland’s rising stars on the home-grown DJ scene.

But unlike many of her male counterparts who have opted for the commercial DJ world, Venus is keeping it different.

Catherine McDonnell started out on the scene 11 years ago as DJ Venus Rollergirl, at the time she simply wanted to DJ music she loved.

The Coleraine born DJ turned up to events on her rollerskates and quickly made a name for herself catering for the local alternative scene.

She said: “Everybody wants to be a DJ and it can be a hard industry so you have to stand out. 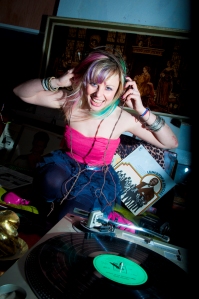 “I was lucky enough in 2007 to work with the Princes Trust and I secured a loan to start up my business and purchase equipment.

“I was always into music, radio production and live radio. At college we were taught how to produce short radio packages on a portable tape cassette recorder and edit on a reel to reel revox.

“In 2001 whilst at university in Sunderland a friend from Norway had a set of turntables, mixer and records and she taught me the basics. With lots and lots of practice I was hooked.

“I changed my name to Venus at university, at the time I wanted to produce documentaries and thought you should have a catchy name. Rollergirl came from being on my rollerblades skating at house parties.”

Venus began making a name for herself throughout the pubs and clubs around the Belfast, performing at residencies and one off events. 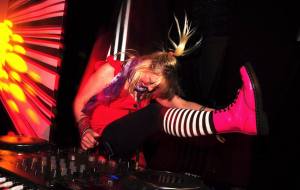 And while Venus, who now lives in Belfast, has ditched the “rollergirl” part of her name she says she will never lose the skating image.

“I haven’t grown up” she said: “I still have rollerskates and dance like no one is watching.

“Playing music for people whether it’s a wedding, festival, club night or tea party, seeing people dance, either going nuts, swaying or smiling, is a great confirmation that you’re doing a good job.”

Now turning up to gigs is a much safer experience.

Venus admitted: “I’m petite and at some club nights in the past, I had to stand on beer crates to reach all the DJ equipment.

“I love to dance behind the decks as it helps me beat match plus its fun. But a few times I have fallen off in style.”

To catch DJ Venus in action you can see her at her new monthly residency at the The Poet Bar & Grill in East Belfast.

She will also perform at the Love Music Hate Racism family event at Orangefield Park on August 29.

Northern Ireland based singer/songwriter and musician.