NORTHERN Ireland’s World Oyster Eating Champion has revealed he wants to find someone who he can train to beat him. 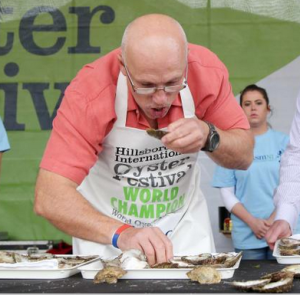 And although 59-year-old Colin Shirlow says he’s confident he can find a winner to fill his boots – they better watch out.

Because the Dromore man reckons he will return to beat his protege.

A decade ago former boxer Colin was crowned World Oyster Eating Champion by the Guinness World Record association after eating a whopping 233 oysters in three minutes.

Colin remains unbeaten since 2005 and has even been studied by some of the world’s top competitive eaters to help them improve their own performance due to his unique oyster-eating technique.

“I hadn’t really thought of my technique as being truly unique and I take this as a real compliment” said Colin.

“I am very chuffed that my technique is something which is helping to inspire professional competitive eaters.

“I think the reason I’ve done so well is having fast hands and a good eye to hand coordination. I wonder if my former boxing career has helped along the way?”

Now Colin is going to pass that technique on to someone else, in the hope they can beat his world record.

He said: “Because it’s my tenth anniversary of my Guinness World Record, I am keen to find someone who, just like me, doesn’t yet know that they have what it takes to be the next World Oyster Eating Champion.”

Colin won his World Record in his second year of competing so says he’s confident his successor can take his title very quickly.

He added: “I started competing in 2004. I had never eaten oysters before I undertook my first challenge at the Hillsborough International Oyster Festival back in 2005.
“I wasn’t necessarily attracted to the challenge, I think I was just in the wrong place at the right time.

“I would have been competitive in other areas in my life when I was younger.

“But it hasn’t always gone well either. Sometimes I’ve been sick, but luckily well after the competition.”

However, he isn’t planning to have a successor for long.

Colin is already planning to challenge his homegrown winner.

“I think if I find a successor with a good stomach we’re in with a chance” said Colin.

“I am approaching my 60th birthday and I’m keen to give someone else the chance to learn my technique. This way I can make a comeback in years to come.

One of the world’s top competitive eaters, who has closely studied Colin’s technique is FoodChallenges.com owner, Randy Santel.

Speaking of champion Colin Randy said: “I have closely followed the sport of competitive eating since 2010, and individual eaters from the UK, Europe, Australia and the USA who compete in global food challenges.

“The World Oyster Eating Championship has been of great interest to me and I’ve watched all of the videos on YouTube and have used Colin’s techniques in every oyster eating contest I’ve done.

“Everyone in the USA does. He is absolutely flawless and unstoppable.”

In recent years Colin has been challenged by some of the best and the fastest competitive eaters in the world, including Matt Stonie, Sonya ‘The Black Widow’ Thomas, Miki Sudo, and Bob Shoudt, none of whom have managed to get near Colin’s world title.

The World Oyster Eating Championship is one of the main events at the Hillsborough International Oyster Festival which runs from September 1-6.

If you think you have what it takes to be Colin’s champion successor email WOEC@hillsboroughoysterfestival.com.

For more information about the Hillsborough International Oyster Festival log onto www.hillsboroughoysterfestival.com