Motionless In White and Chelsea Grin will play Belfast’s Mandela Hall with support from New Year’s Day on Monday November 23.

The American gothic metalcore band, described as “a powerful force that easily stands out in the spectrum of aggressive music” is enjoying its finest year to date, currently on an arena tour with Slipknot and set to embark on their very own headline world tour.

Since 2005, this Pennsylvania based metalcore act have cultivated a hardcore following via their Gothic-inspired aggression and imagery, and that buzz has reached fever pitch with the release of their third full-length album Reincarnate along with lead singer Chris Motionless featuring in New Year Day’s new single Angel Eyes.

According to critics MiW are back with their “strongest collection of songs yet”, and it seems as if there’s no stopping this act when it comes to what they can accomplish.

Alessandro Rocco, lead guitarist of Deathbus and an avid fan of MiW said: “Motionless in white are unique in the sense that they combine modern metal with the 90s industrial style that was created by bands like Ministry, Marilyn manson and Rammstein. 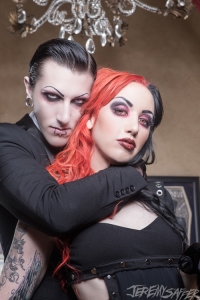 “Their live shows stand out because of their energetic performances and their attempts too make their stage shows entertaining, even on a lower budget compared too bands like Rob Zombie.

“The second time I saw them I got a chance to meet the band and watch their soundcheck and they are all really cool guys.”

Also on the bill are Chelsea Grin, an American deathcore band from Salt Lake City, Utah. They have a large following in Northern Ireland and they are expected to pull quite a large crowd of young metal fans.

New Year’s Day, a female-fronted pop-punk group from California are also supporting, NYD have recently toured with Glamour of The Kill and Escape the Fate.

Tickets for Motionless In White, a 14+ show, at the Mandela Hall on Monday November 23 are £15 and available from Katy’s Bar & Ticketmaster outlets nationwide as well as online at www.ticketmaster.ie and www.limelightbelfast.com or by calling 0844 277 44 55.