A COUPLE whose lives were devastated by the suicide of their son have revealed the gruelling truth of the heartbreak of those left behind.

Enniskillen parents Mary and Ian Monaghan’s worlds were shattered on March 22, 2014 when their son Paul, 22, took his life.

Paul was one of 268 people across Northern Ireland that year to die by suicide and in an attempt to raise awareness for the issue Mary and Ian have revisited the site where he died in a new short film No Ordinary Goodbye by Belfast director Janine Cobain.

The film, which sees Ian, Mary and their daughter Melissa reveal the heartbreaking truth of the trauma Paul left behind will screen at Film Devour Short Film Festival in Belfast on the April 18.

Speaking in the film, which marks the second anniversary of his death, Mary said: “Hearing that your child has taken their life I don’t know if you can put it into words.

“Burying your child is one of the most horrendous things I think any parent will ever do, I personally feel like the day I buried Paul, I buried half of myself, or a good quarter of it because life just doesn’t feel the same anymore.

“It’s like a part of me’s gone, a big part has gone. I feel like Ian and Melissa have very similar personalities, very similar traits and you know they like the same things.

“Paul would have been like me, bubbly and outgoing and I just feel I lost part of myself.

“I was adopted as a child, Paul was my first blood relative and to lose that just feels like you’ve lost a limb. Just going about daily chores, it’s horrendous.

“It’s a permanent solution to a temporary problem, I don’t believe at 22 years of age that there was anything that would have troubled Paul so badly that he couldn’t have fixed or that we couldn’t have got him help for whatever was troubling him so bad.

“I would say I left for work that morning probably around the same time as he was found. Things that torture me are that as a mother why did your gut instinct not sorta tell you that your child; something’s happened but there was absolutely nothing.” 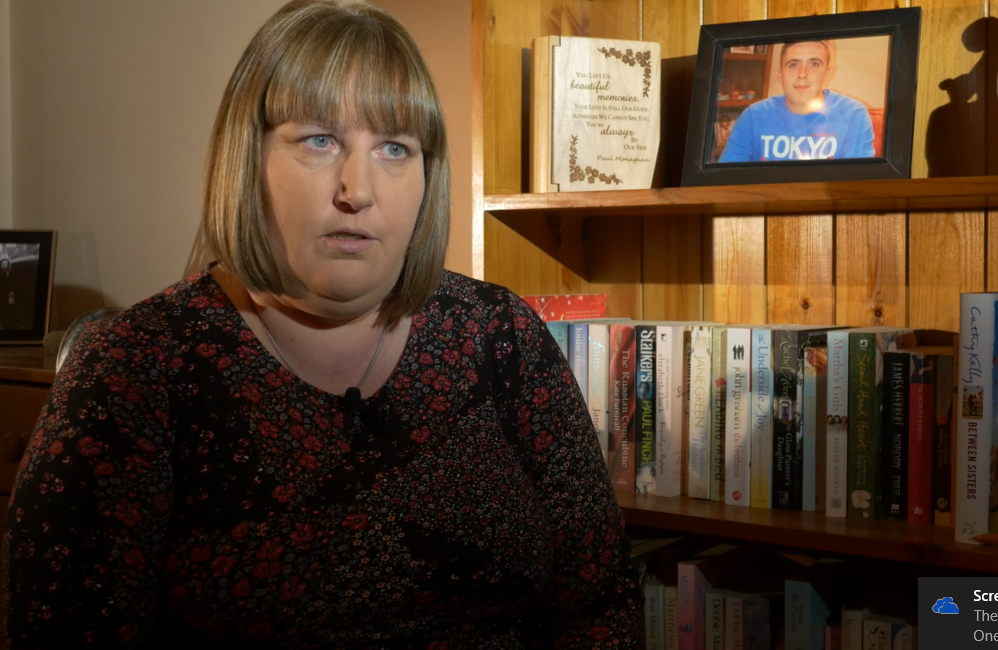 Mary Monaghan speaking in the documentary No Ordinary Goodbye

When Ian heard the news, he was convinced they had made a mistake, he couldn’t believe it was his son.

He explained: “I just thought they’d made a mistake there’s something not right about this.

“It’s hard to grieve, really hard, I find it hard to grieve. I just try and support Mary and Melissa as much as I can and pray that time will somehow heal us but you know it’s something you think about everyday from you get up until you go to bed.

“It just comes and kicks you when you’re not expecting it you know.

“The hardest thing is getting up in the morning and getting out, getting on with life. Sometimes you think of the things he could be doing if he was still here the stuff that he would be doing as a normal person trying to live life. That really gets you, it’s really hard to deal with it can be something simple maybe a song on the radio a song that he liked just something simple can throw you completely that’s the hardest thing.”

The Monaghan’s story touched director Janine Cobain so deeply that she felt compelled to write and direct No Ordinary Goodbye.

She said: “The Fermanagh and South Tyrone parliamentary constituency where Paul lived had the highest number of suicides in the year he died.

“Despite the hard work by the various agencies and charities across the province, the suicide prevention programme continues to fail with disturbing regularity and devastating consequences.

“Undoubtedly, there are issues with funding and support for people who are struggling with their lives, but ultimately, suicide is a choice and we need to reach those who are vulnerable before they decide on that path.”

Ian and Mary Monaghan revisiting the scene where Paul died

In the film Mary and Ian visit the site where Paul ended his life, bringing back heart-wrenching memories of the lead up to the first time they attended the scene.

“I was in work and one of my work colleagues said there were people outside who wanted to speak to me. Paul’s girlfriend just said to me that he was dead and that he had took his life during the night, the rest is a bit of a blur” said Mary.

“I had the chore of going to tell Melissa which is probably the hardest thing I’ll ever ever do because I had to wake her up and just say to her Paul was dead.”

Paul with his sister Melissa just five days before he died

As well as beautiful memories of her son, Mary is plagued with the horror of that day, especially at the site where he died.

Ian remembers the authorities weren’t going to bring them to see Paul at the scene, but as parents, despite knowing how hard it would be, they insisted.

He said: “I remember there was a Policeman that we know, we grew up with, he was there and that’s when I seen him. That’s when I broke down because I knew it was true and the Policeman hugged me and told me he was sorry the two of us cried our eyes out and then he said I’m gonna bring you down to see Paul, I don’t want anyone else to go down with you.

But the horror was only beginning explained Ian. Seeing their lifeless son at the scene of his death was set to only get worse.

“When Paul was coming home the undertaker was very good, I was dreading that phone call because again we were going to have to see Paul and he wasn’t gonna be alive he was going be in a box.

“It was hard to comprehend how we were going to be able to cope with it.

“We kept him at the house and instead of bringing him to the church we just kept him from here until the morning of the funeral, we just wanted to hold on to him as long as we could. That morning again we were gonna have to say goodbye and it was horrendous.”

Filmmaker Janine hopes the Monaghan’s powerful story will help others in need seek help before it’s too late.

She said: “It was important to me to give the Monaghan’s a voice, to help them feel they are doing everything they can to prevent another family finding themselves in the same position.

“With huge support from Carl Quinn and Gareth Stewart of Empty Horoscope Media, we made this film in the hope someone who is considering suicide as an option might see it and reach out for support, to spare their loved ones the trauma this family has experienced. The Monaghan’s story is only one account of devastation which is replicated on an almost daily basis.”

For Ian and Mary, they want to prevent other families living the nightmare they did.

Mary said: “I couldn’t prevent Paul’s death, but I will do everything I can to raise awareness and hopefully prevent another family suffering the same loss we have.

Ian believes had Paul have understood the gravity of his actions he wouldn’t have chosen to end his life by suicide.

“I know for a fact if he knew the pain that his family and his friends and his girlfriend and everyone else that’s left behind are in he wouldn’t have done what he did. It would be as simple as that, he would not have done it, no way. I’m pretty sure he’s where ever he is he knows that now.”

The documentary No Ordinary Goodbye will screen at Film Devour Short Film Festival in Belfast on the April 18.

Anyone in Northern Ireland who is in distress or despair can call Lifeline free on 0808 808 8000. Their helpline is open 24 hours a day, every day of the year.