Shelley Rodgers, 40, has launched Belfast’s first ever Alternative Fashion Week and is already inundated by models, photographers, makeup artists and designers vying for the chance to be involved.

The inaugural Belfast Alternative Fashion Week is set to take place in November in venues across the city.

And Shelley, who is also founder of Equal Fashion Magazine, says she’s excited to show the real diversity behind the fashion industry in Northern Ireland.

Having travelled substantially as a child, lived in the Canaries and since worked with fashion and music industry executives from America, UK, Norway, Germany, Spain and other areas in Europe; Shelley has a dream to show how being alternative is more acceptable than most people believe.

Belfast Alternative Fashion Week will feature events that will explore body art, tattoo conventions and installations with Blue Sphynx Tattoo’s, fashion designers from London such as Aleah Leigh who makes dresses from train tickets and other unusual items.

As well as a number of creatively inspired catwalk shows BAFW will also include young up and coming student exhibitions.

Whilst for artist Shelley seeing her brainchild come to life is a dream come true.

She said: “In Northern Ireland I feel there’s a misconception that in order to exist in the fashion industry you have to conform to a particular look, be a certain size or fall within a designated age range. Almost by accident we seem to conform to one small idea of what the fashion and beauty industry wants or entails and that’s just not true.

“You only have to walk down the street to see the creativity of our fashion industry and see how style and trend is translated by everyone you meet.

“What I wanted to do was show this diversity in our society, to strip back the idea that if you didn’t conform you weren’t beautiful. I feel that there has been an imbalance in our fashion industry that favours a particular type of high street look which, when you get down to it, isn’t a true representation of how creative people actually are.” 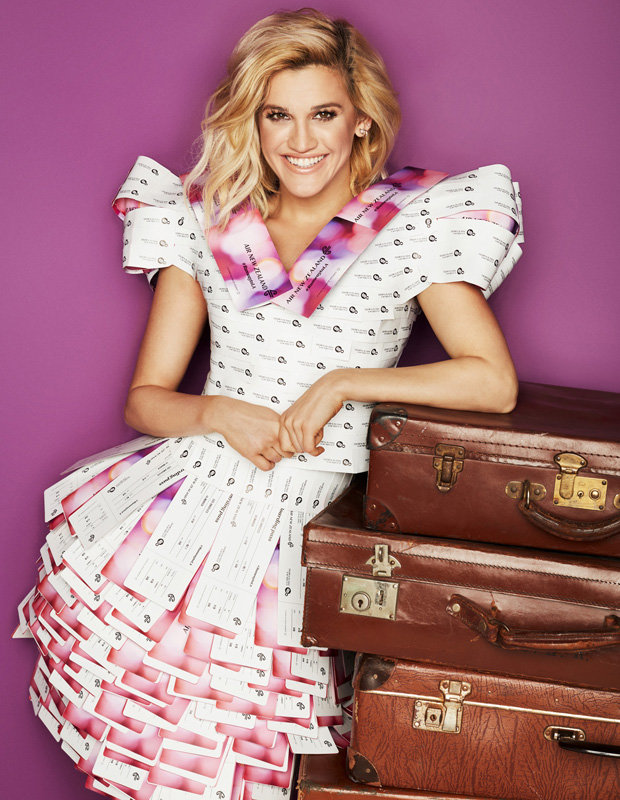 Former Pussycat Dolls member Ashley Roberts in a bespoke dress created from boarding passes by avant-garde designer Aleah Leigh Wood who constructed the unusual garment from more than 5,000 of the airline’s boarding passes

Shelley added: “Although many people are purchasing their clothing in high street stores they are being much more creative about how they wear it. So one woman might rock a t-shirt up but the same t-shirt can be worn in a boho-chic way or paired with a jacket for a smart casual feel.

“Gone are the days when being alternative was deemed weird or strange. The fashion industry is constantly striving to show individualism and creativity in new and original ways and Northern Ireland has a burgeoning industry of professionals who are having to take their trade away from their home country because it was deemed ‘too far out’ or ‘not conforming’ to what was seen as ‘normal’.

“I work with some amazingly talented make-up artists, photographers, designers and models across the country and further afield, I think it’s time they were able to shine on their own home turf.

“Belfast Alternative Fashion Week is about finding the beauty in all walks of life and developing a platform for creative people to converge and bring the diversity of our streets onto the catwalk.”

Also appearing at the show will be a wide range of Northern Ireland music acts put together by singer/songwriter and musician Kieran Sherry.

As music director for BAFW he is hoping to pair the right local talent to each of the shows during the event.

Hairdresser Paul Meekan will be bringing his Best Of Grey show to life with a series of grey haired mature models whilst SFX makeup artist Amy Rachel Clarke will explore gore and horror.

“We will also be bringing a wide range of creative people across to Northern Ireland such as fashion designers, models and photographers as well as makeup artists and musicians from London, Amsterdam, America and throughout Europe.”