The HARP Angel was joined by Belfast actor Ian Beattie, who plays Ser Meryn Trant in Game of Thrones, as they celebrated the local talent and spectacular locations that have made Northern Ireland the must-visit destination for Hollywood directors and casting agents.

It comes as the world gears up for the premiere of the sixth season of Game of Thrones, which will be broadcast on Sky Atlantic on Monday night.

As head of the newly-formed HOUSE HARP, the HARP Angel invited Ian to be his right hand man at The Blue Throne, which was created by local set-designers who have worked on the show, using more than 600 HARP bottles.

The pair paid tribute to a host of local ‘Extras’: men and women who have added much to the cultural output of Northern Ireland in recent years and, as a reward, have now been made honorary members of HOUSE HARP.

Since Game of Thrones began filming in Northern Ireland back in 2010, hundreds of local extras have played their part in its success, which has contributed £110million to the local economy, according to BBC reports. 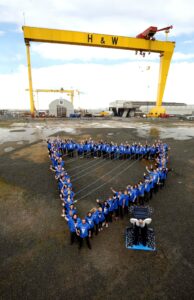 HOUSE HARP is an optimistic community – opposed to the grim outlook of many literary ‘families’ – which promises to Look on the HARP Side with its uplifting maxim: ‘Summer is coming’.

Ian Beattie said: “My character Ser Meryn Trant was a horrible villain who did a lot of terrible things, so it’s wonderful to be able to join HOUSE HARP, a House that celebrates all that is great and good about Northern Ireland. It’s been a refreshing experience.”

Lisa Ronayne, Senior Brand Manager for HARP, said: “HOUSE HARP champions the people and locations of the North. People who watch shows like Game of Thrones often think ‘the North’ is a cold, dark and repressive place, but we’re showing its sunnier side.

“HOUSE HARP is a positive and optimistic movement. HOUSE HARP encourages everybody to Look on the HARP Side and bask in the warm glow provided by our rich history of providing fabulous extras (and stunning backdrops) for major film and television productions.”

HARP has created a short video highlighting the role of Northern Irish extras in blockbusters, check it out below:

To find out more about HOUSE HARP visit www.facebook.com/Harp.