We’re almost half way through Game of Thrones Season 6 and Sunday’s episode, Book of the Stranger, was one of the most thrilling yet.

Admittedly, I was somewhat surprised at how utterly overjoyed this episode made me. Dominated by fierce female characters, fans were rewarded with reunions, alliances and an ending that damn near blew my socks off.

Can we just take a moment to relive the beautiful moment Sansa Stark was finally reunited with her half-brother Jon Snow?

The thing is, we are so invested in the Starks because they’ve arguably been through more torment than anyone (except Theon, obvs) and we remember them as a solid, loyal family unit from the very start. To finally see two of them reunite after everything that has happened over the last five seasons is just awesome.

Even better, it seems Sansa and Jon are joining forces to try and take back Winterfell. Ramsay may still be holding little Rickon hostage in his dungeons and have an army of 5000 waiting to do unspeakable things to the remaining Starks, but I have faith in the old Gods AND the new that others will pull through for Jon and Sansa. After all, the North remembers.

That’s not to say it’ll be easy. GoT loves to set us up for a fall and I have no doubt we’ll be sacrificing a lot of well-loved characters along the way. Speaking of which…Osha was stabbed in the neck while trying to seduce Ramsay. I did see this coming, he’s not going to go easily, but it was sad to see her go nonetheless.

Meanwhile in King’s Landing everything’s still a bit up in the air, with Cersei trying to crush the High Sparrow as well as dealing with Lady Tyrell’s sick burns. Loras and his sister Marjory shared a brief reunion which only really served to tell us that poor Loras seems to have given up altogether. Things will seemingly come to a head in the coming episodes (it’s just a matter of whose head, really).

A THIRD sibling reunion happened when Theon returned to his sister Yara. Trying to do the right thing for once, he agreed that she should rule the Iron Islands. Which is true, she’s hard as nails.

Best romance of Season 6? It’s got to be Brienne and Tormund. Okay, it’s a potential romance at present, but they shared THAT look over dinner and I think this could be the start of a great team. Plus, Brienne deserves some happiness…she’s constantly grimacing.

Tyrion is attempting to deal with the politics back in Meereen by suggesting that the Masters have a 7 year time limit in which to abolish slavery. It seems like a potentially good compromise that might save what’s left of the city, but Grey Worm and Missandei’s warnings against cooperating with the Masters suggests a violent revolt could be on the cards if he is to proceed. Not to mention all the peeved peasants who will have to return to slavery. 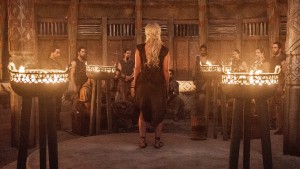 But of course, the best was saved ’til last. Daenerys finally got her groove back when she burnt the Khal and his men to cinders in Vaes Dothrak as they were deciding her fate.

Honestly, Dany desperately needed a bad-ass scene like this and it certainly did the job of bringing her back into the spotlight as the fierce Khaleesi she really is. Emerging naked from the flames once again to a kneeling Dothraki horde, one may think this could be a nice addition to her army of Unsullied. Perhaps even enough to take a trip West…?

Overall the fourth episode of Season 6 SLAYED, and most of it was down to the development of some of the powerful female roles. Don’t get too excited, though. Thrones scriptwriters seemingly hate seeing fans happy, so love no one!

Watch episode 5, The Door, on Sunday May 22 on HBO