When it comes to theatre it doesn’t come more raw than Belfast writer Pearse Elliott’s creations.

I’ve known Pearse many years, since his early successes when he was one of the most interesting men I’d interviewed in my early career.  I still remember that interview we did for the Sunday World, I remember it because I was in awe of him then as I am now…why?  Because he is “real”, as real as it gets and he makes no apologies.

The thing with Pearse (author of The Holy Holy Bus, Man About Dog and Man in the Moon) is that he literally takes every stereotype, every prejudice and every expectation of the theatre world and chucks it “out the windy” in a typical Belfast boy style.

What’s more is that he writes about worlds he knows, he takes real life situations and with spectacular poetic licence turns them into gritty, edgy, twisted comedies that literally make you shudder and wince then roar with laughter. 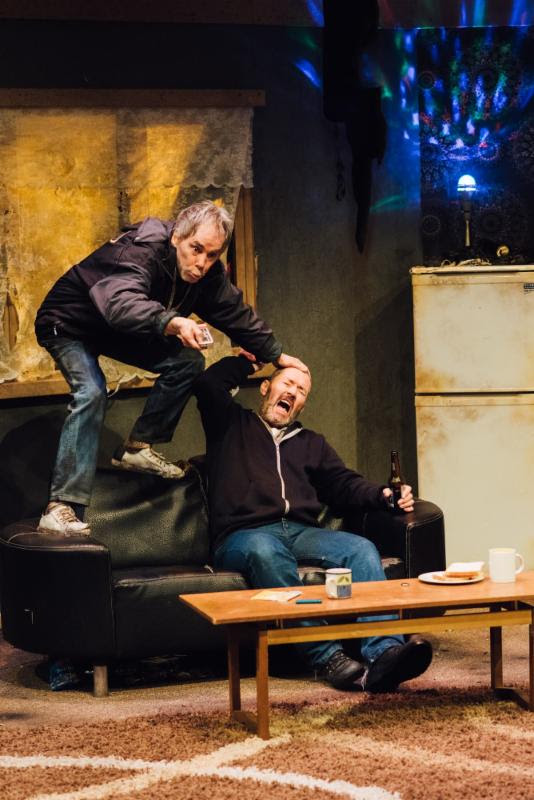 Earlier this week I went to see his new play As The Tide Ebbs at the Lyric Theatre in Belfast.  Produced by Lyric and the Rawlife Theatre Company I had high hopes for this one.  Not only was I already a fan of Pearse’s work but my partner Ciaran McElhinney also knows him well.  I’ll be honest, I was nervous, what if we didn’t like it?  How could we possibly review it?

As we sat down to the set by designer Niall Rea I was totally captivated by the detail, each tiny detail of the grubby, grotty, stinking hell-hole that someone called “home” was brilliant.  Right down to the red blinking electric light…”this is gonna be a good one” I thought.

As The Tide Ebbs is advertised as “a darkly comic thriller about truth and buried lives” and it delivers over and above expectations. 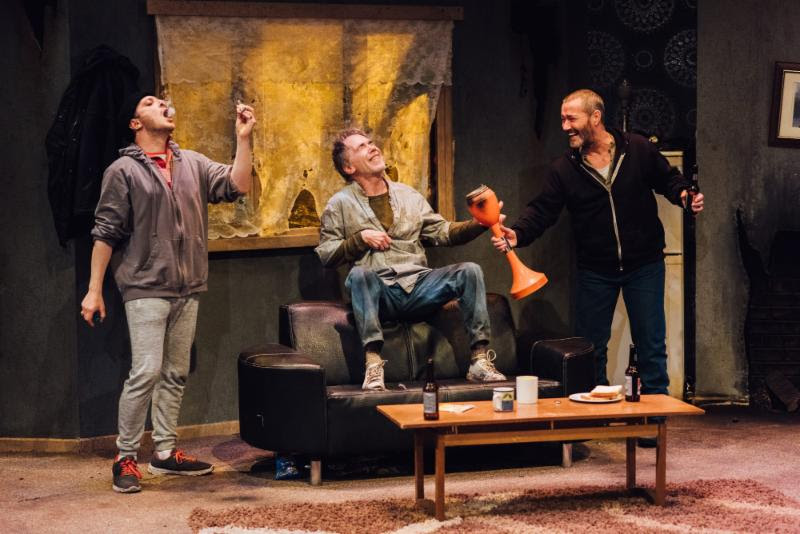 In the play Marty Maguire and Billy Clarke are Fuzzy and Shasu – two middle-aged, alcoholic down and outs who live in Shasu’s desolate council house in Belfast. One evening they are joined by a stranger (Michael Liebmann) from the local area for some “smokes and gargle”, but as the night passes and stories of lives, loves, regrets and dark deeds are told, the real reason for the stranger’s visit become clear.

I really don’t want to give the game away for this one but my partner ACTUALLY partied in the same house Pearse drew his inspiration from.  Hilariously, Pearse watched intently to see whether he would notice – he did.

Marty Maguire and Billy Clarke as Fuzzy and Shasu

Speaking of the play Ciaran said: “The play showed life in the suburbs of Belfast city and it’s many colloquial diversities.  It was not only hilariously funny but downright scary at times.  Pearse showing yet again that he has a grasp on real life in Northern Ireland and isn’t afraid to put it on the stage.”

For fans of The Band, famed for songs such as Ophelia and The Wait and their film The Last Waltz, this is a must-see production.  How Pearse intertwines Fuzzy’s love of the music into the characters and their interactions is fabulous.

These scenes were particularly poignant for Ciaran, who not only remembers listening to the same songs on repeat at the “real life Fuzzy’s” but actually sang and played a few on guitar at one of those – now famous – parties.

“Watching this play was surreal, it was like being transported back to those parties, the realism was fantastic.  Thankfully, there was no sinister twists when we were there.”

Marty, Billy and Michael gave performances worthy of any global stage which could rival any Hollywood star.

As The Tide Ebbs runs at the Lyric Theatre until June 5.  More information log onto www.lyrictheatre.co.uk.