As Cool FM star Stuart Robinson began piling on the weight the popular DJ deluded himself into believing it was all part of the act.

The once 23st radio show host had previously shed over eight stone in a bid to reduce his expanding frame, but that was in 2008 and since then the 36-year-old had piled on over five stone of the weight he’d dropped.

Now, as part of an on-air challenge #SlimForTheSummer, Stuart is back on the weight-loss track and has already managed to shed over FOUR stone.

On a trip to America in November 2015, Stuart realised he was in danger of becoming too large for the rides again, but that didn’t stop him “eating his way around Las Vegas” he admitted, or “making the most of an all-inclusive buffet” on holiday in Tenerife over Christmas.

“When you’re the size I was you play into the character. You come out and you’re that fat guy off the radio and you play up to it and you make peace with it, and, if truth be told, your mind is protecting you from being hurt” said Stuart.

“If I put myself out there and position myself like that no one can hurt me because I’m already saying that – self-deprecating – it’s a self defence mechanism.

“On the way back from Tenerife on New Year’s Day I could feel the belt just about got around me on the plane, it wasn’t good. I felt terrible.”

At the start of 2016, weighing in at 19st 1lb, he finally accepted something had to be done. 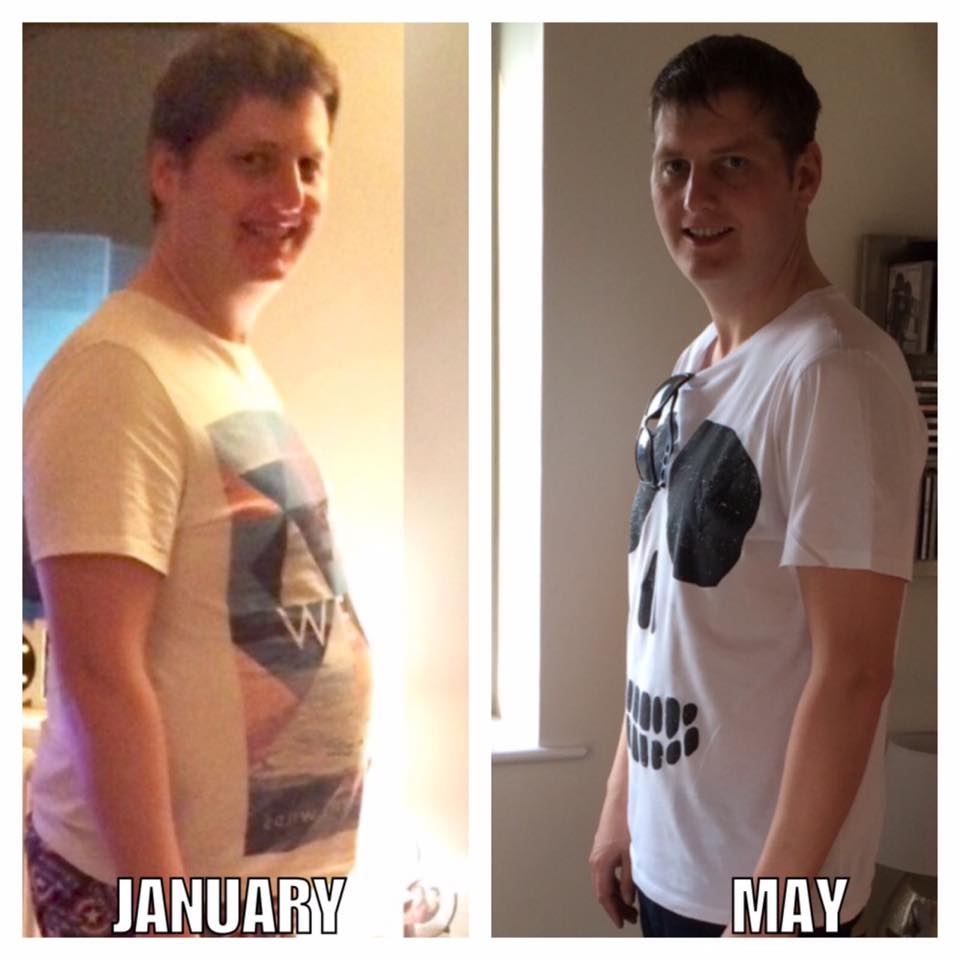 Before and after. How Stuart changed in size between January and May 2016

In a desperate attempt to get his life back on track, Stuart took the brave decision to make his journey public and take to the airwaves in the hope of finding the inspiration and motivation to keep going.

“The reason I’m doing it publicly is to talk about it candidly, to delve deeper than the aesthetic. When it comes to obesity, we’re too ready to be outraged; how can you tackle something like this if you can’t talk about it publicly?

“What really irritates me is the stereotype that men can play into the fat character, but women can’t.

“A few weeks ago, someone complained at me using the word fat – while referring to myself. It shouldn’t be offensive to use the word; I was fat, that was a fact, it’s how I felt and looked, in my opinion, and I had every right to call myself out publicly.”

Determined and passionate, Stuart embarked on a one-man crusade to banish the myths around obesity and weight loss.

He explained: “The weight part is easy – simple science; move more eat less. I find calorie counting intriguing; the counting up of what comes in and out is just math, all it takes is the time and effort to work that out.” 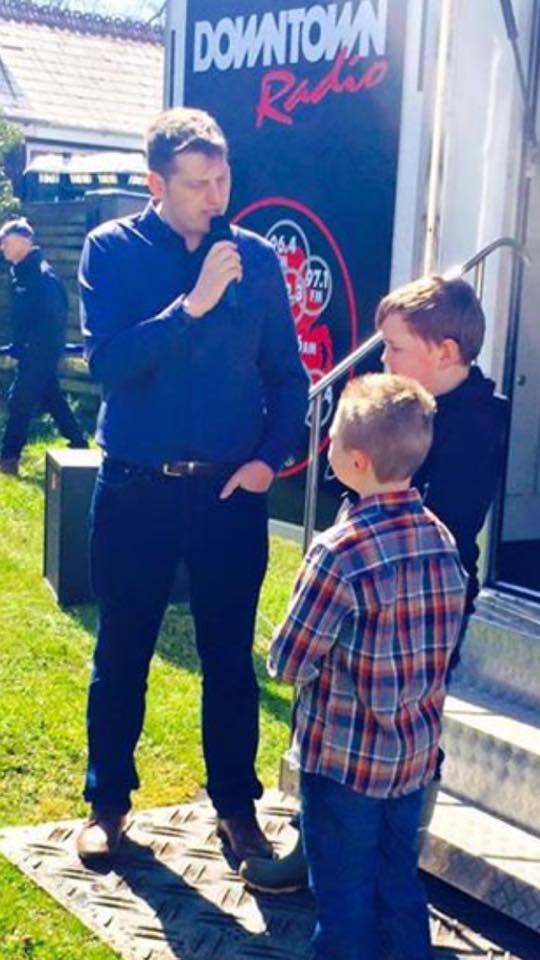 But he feels not enough people are talking about the mental journey, and believes understanding the psychology about why you over-eat is a key factor to successful weight loss. “Emotionally in every aspect I was unhappy, I had no energy and I felt I was in a rut” he said.

“Every day I felt tired and drained and the more negative I felt the more I would eat to make myself feel better, I was in a vicious cycle.

“I wasn’t eating because I was depressed, for me being in a steady relationship and becoming happy with everything meant I didn’t worry about how I looked physically, it creeps up on you and you don’t see things building up.

“Ironically being happy has led to being unhappy.

“You’re just miserable all the time, behind the scenes. People see the jolly you, but you’ve stopped fitting into the nice clothes, and then you’re a week away from having to shop in ‘that other shop’.

“I was wearing triple XL shirts at one stage, and when they stopped fitting the next one after that is jumpers. You become more and more casual, not because you want to but because you have to. It definitely makes you feel less confident, and because I’m taking a psychological approach to losing, you have to accept the psychology in reverse.

“While you know you’re obese and unattractive, it’s the mind-set the physical aspect is the easy part, it’s what’s going on in your mind and how you deal with it and compute it, and how it affects you; from your confidence and your ability to work properly, or play with your kids, and not wanting to go out and enjoy yourself.”

One thing Stuart is keen to get across to others on the same journey or those who haven’t started theirs is the level of delusion that goes on.

He said many people don’t understand how destructive those delusions can be.

“Of course you kid yourself when you’re fat. You tell yourself that clothes have shrunk a bit in the wash; all the lies you tell yourself before you come to a sudden moment of realisation where you have to cut the crap and get your head in gear. You sit about waiting for the lightbulb”. 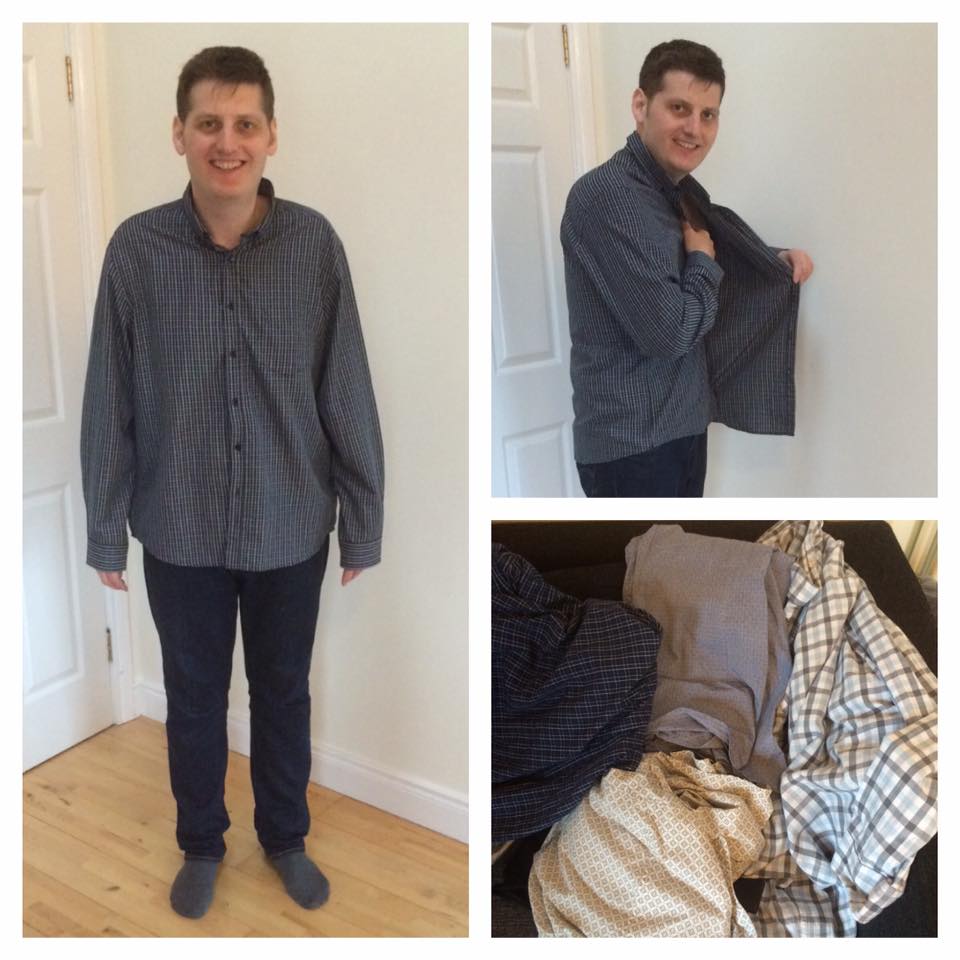 “Day 114 #SlimForTheSummer – now that I’ve officially lost 4 stone, today I’m throwing out my horrendous shirt collection – the one I’m wearing in the pic was actually too small on me in January, that’s when I knew I had to do something drastic with my weight, as this is the largest size you can buy in normal shops – now it can fit round my stomach twice over!” said Stuart on his FB page

Stuart set out with a target of a 3.5 stone weight loss over six months by making simple tweaks to his lifestyle that could be sustained over a period of time, to show it could be done without a personal trainer or fad diet.

He hoped weekly weigh-ins on the radio show, and doing a video blog would keep him accountable and stop him reverting back to bad habits.

“Before I started the diet, my skin was bad, sleep was awful; I thought we needed a new mattress as I could feel the springs after a few weeks, instead of admitting I was heavier and sinking deeper into it.

“I think only people who have really struggled with weight understand what it’s like when you come off all those foods that you love and it’s only then you kind of realise how bad it is, when you genuinely get yourself to the point where you’re actually craving a McDonald’s, and that’s not normal. So you need to go through the first week or so I think a period of adjusting, and I think that puts you in better stead to go the distance.” 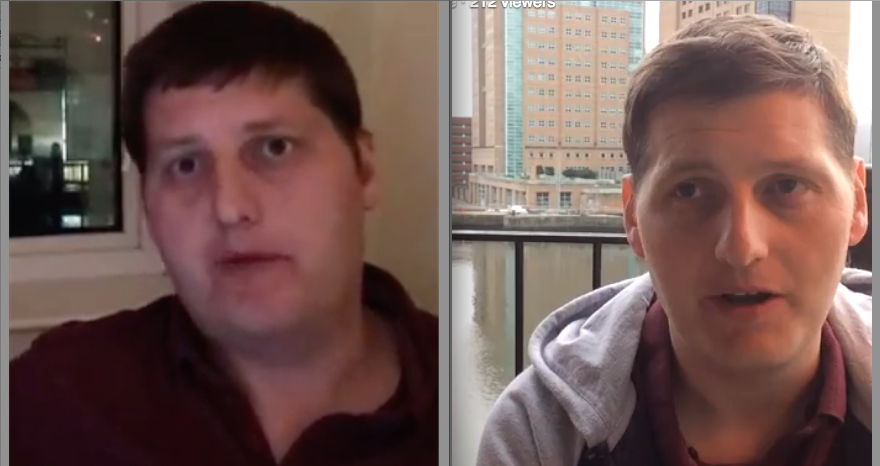 “Another 3 pounds off this week – taking my total weight loss to 2 and a half stone in 50 days! #SlimForTheSummer” said Stuart on his FB page when he posted these pictures

Stuart started to feel the benefits quickly. “My girlfriend said I stopped snoring within a few weeks of changing my habits.”

Through his video blog he continued to inspire those who had joined him, on day 37 he highlighted the fact that a short time earlier, he was in a much darker place at over 19 stone.

“I had no energy, no motivation and to make those early changes in the first few days is bloody difficult, I’ve got a long way to go but it is worth mentioning that six weeks ago I was in the 19 stone weight range and here we are 37 days on into the 16 stones” he told Facebook fans.

Within six weeks into the summer challenge, having busted the two stone loss mark, Stuart faced a challenge he had set for himself; to fit into a special shirt – a Christmas present that didn’t fit.

“I said that I would make it my mission to get into this shirt for Valentine’s day,” said Stuart in the video diary: “Of course the offer was made to take the shirt back and get a bigger one, but where does that stop?

“You know, we could constantly keep running back and getting bigger clothes and that’s the short term fix isn’t it? It’s not going to solve the problem.”

Stuart’s delight and fitting into the shirt comfortably was shared by those watching his live feed.
“Short to mid-term goals are very important if you’re trying to lose weight and get into shape” he said.

But at the nine week point he was struggling. “I pigged out, I did bad things I did things I regret, I wasn’t focused and I wasn’t taking it seriously” he said.

At his weigh in, even removing his shoes, belt and wallet he only managed a one-pound loss and was disappointed with himself. 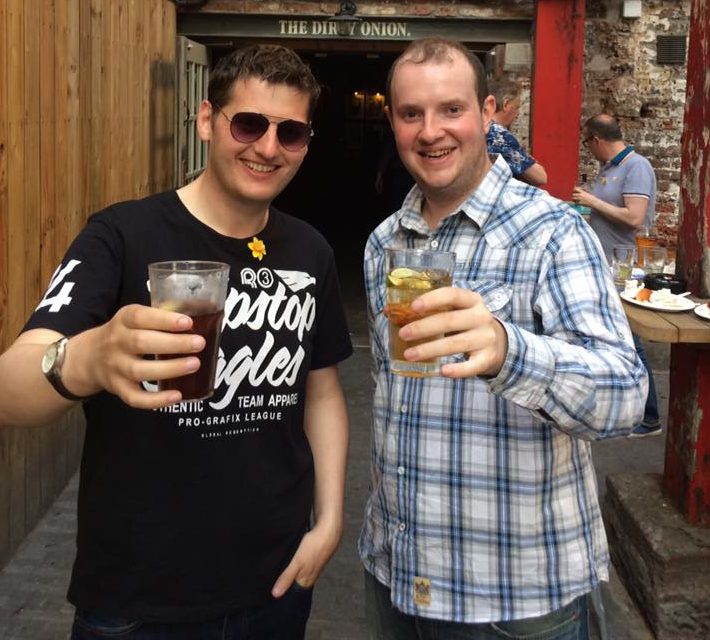 “I had a few incidences where I made bad decisions about the food I was eating and I had stopped exercising but the important thing was that I did get back on track again.

Now, with less than a week to go in his Summer Challenge, Stuart has broken the four stone mark weighing in at 14st 10lb…but the DJ doesn’t intend to stop there.

He said: “I don’t feel like I’ve achieved anything. I know I’ve lost weight, but the achievement part will be getting to my ideal weight and sticking with it, and if I’m here next year and I haven’t put on any weight, that’s the achievement.”