BELFAST seamstress to the stars, Marie Nancarrow, is scoring success across the world with her beautiful, bespoke denim designs with commissions already flooding in from the likes of pop superstar Katy Perry.

By day Marie, 47, from Belfast is mum to her kids Shea (19) and Darcy (4) as well as a fashion designer and founder of TitanicDenim.

At night she can be found backstage at some of Ireland and Northern Ireland’s biggest concerts working with top stars such as Usher, Def Leppard, Whitesnake, Muse, Milie Cyrus, Sting and Paul Simon to name a few.

But TitanicDenim is not only adorning celebrities, it’s also helping out some of the most impoverished children in India.

Using a sustainable model, Marie creates her unique designs from recycled denim to create stunning fashion pieces that are wowing the fashion world.

The recycled nature of production and the artistry involved is a nod to the future, a great example of ‘on trend’ sustainable fashion. For Marie it’s important that a percentage of profits will go directly to projects that alleviate child poverty in traditional sweat shop areas of India.

“Each piece I make is designed and sewn individually making the garment a one off. It involves a lot of craftsmanship, creativity and patience. I would define my range as being a collage of applique art on denim” said Marie, adding: “I’d like to create a positive value for the world in my own small way. The model that I have adapted has the ambition for a percentage of each sale to go directly to youth projects in India affected by sweat shop production. This is very important to me.

“I believe that in life it is massively important to give back. Regardless of how small or big that is it is so important to be aware of others who may be less better off and help. We’re all aware that a percentage of the recycled denim that comes into TitanicDenim will have come from sweat shops, so this is a good opportunity to complete the cycle to take funds back into the affected areas.”

Marie’s TitanicDenim pieces nod to the cultural history of Belfast, from the logo based on a rivet from the docks, to the hard wearing denim itself with design inspiration taken from Belfast’s rock n’roll past, during which time Marie’s dad played guitar with Van Morrison. 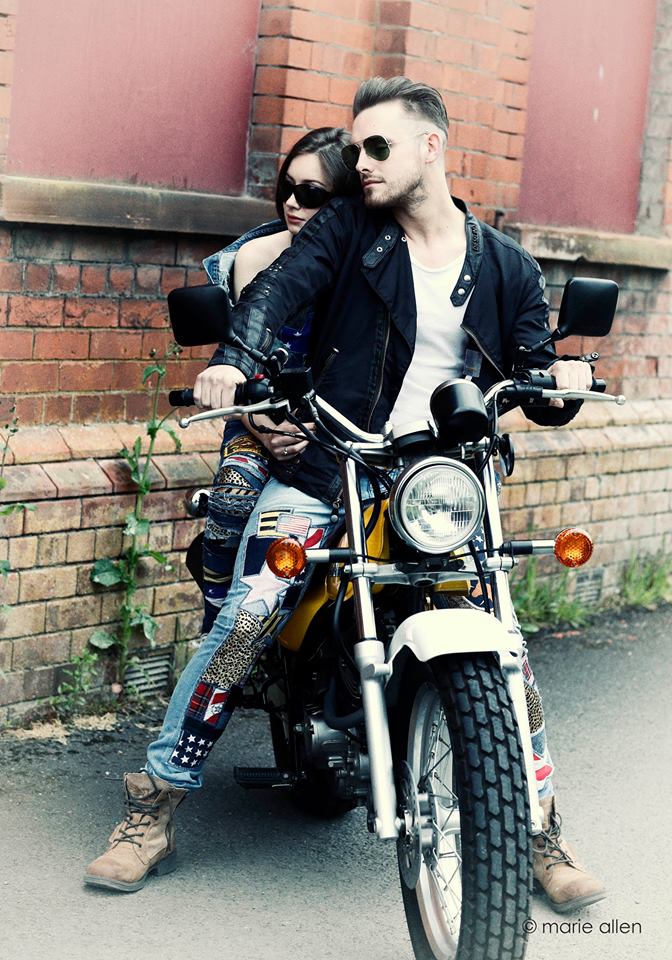 The likes of Katy Perry’s stylist, Johnny Wujek, is full of praise.  He is on record stating: “TitanicDenim is awesome!”

Already Perry has bought a pair of shorts, and likes of Eric Underwood, principal dancer at the Royal Ballet sought Marie down online to order a pair of jeans.

Having worked with everyone from Robbie Williams, Michael Buble and Neil Diamond to Take That, Tom Jones and touring shows like We Will Rock You and Disney On Ice, there’s one thing Marie knows and that’s what the stars want.

TitanicDenim’s artisan approach means that Marie is rooted in the ethos of creativity and hard work, and Marie envisages it growing further

“It has the potential to be a globally recognised brand at the premium end of the market.” she said. “I don’t want to be the biggest in the altered denim space. I just want to be ‘the best’, sought out and worn by stars, musicians and the fashion conscious.

“TitanicDenim is an empowering brand. Wearers make a very simple statement ‘be you’ – women will feel empowered, confident, sexy and comfortable in their own skin. Our menswear allows men to ooze confidence with a subtle undertone of security enhancing their masculinity. Wanting to ‘stand out’ may be interpreted as insecurity; but being yourself is a measure of confidence.” 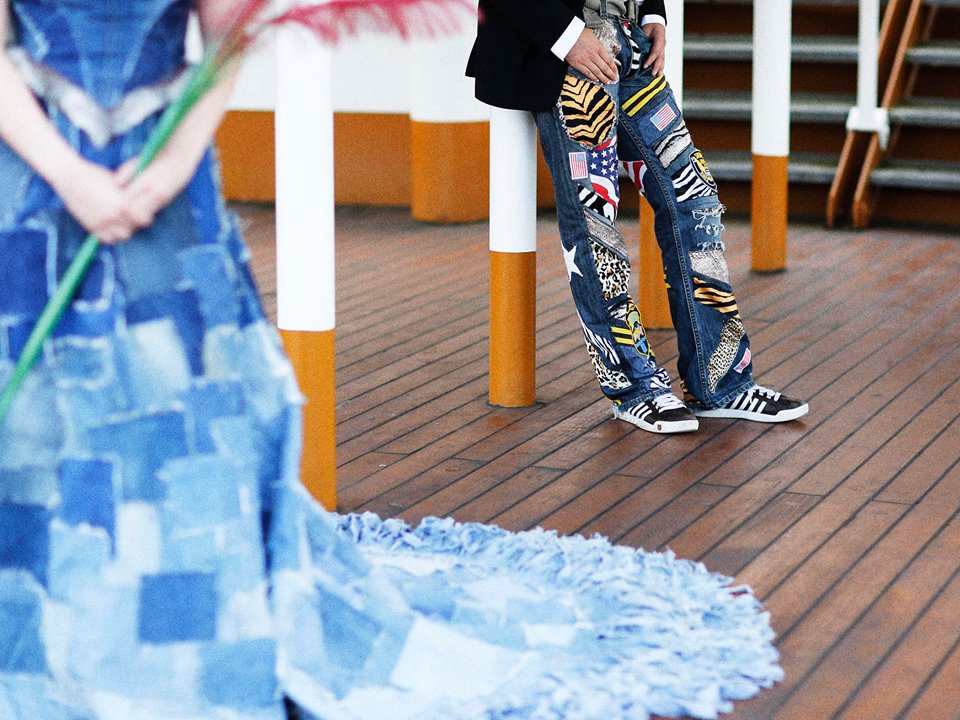 And the raw material was one synonymous with not only Marie’s background but her social circle.

She explained: “From a young age I’ve always enjoyed sewing. I used to do alterations for all my friends and neighbours, most notably the ones who were part of the Belfast rock and music scene.

“At one point I was taking in everyone’s jeans from wide leg to drain pipes. Stretch jeans hadn’t been invented so you can imagine the pain in wearing them. It’s nice to think that my jeans have gigged in some of the best and the worst venues in Northern Ireland and out of NI.

“I studied A level textiles and then went on to do Fashion so I believe it has always been in my bones.

“I imagine I inherited those skills from my Mum who was magic with a sewing machine. She used to make all our clothes when we were kids.

“The idea happened naturally. I was asked to mend a pair of jeans for a friend in a band and I sort of got carried away and added more patches, more colours, designs. They went down a storm and got great compliments.

“People then started to ask if I would do a pair for them, jackets etc and it just evolved. I noticed how much old denim went to landfill, yet it’s a material that is always in fashion in some way, shape or form, so it made sense to create a business built on a recycling foundation.

“I totally love denim, it is incredibly easy to work with and just does what it is told. It is a strong fabric, very versatile, tough and durable and never really goes out of fashion. The list is endless, it’s a huge component in the wonderful world of fashion and a staple garment that everyone owns. I totally love it’s history as well.” 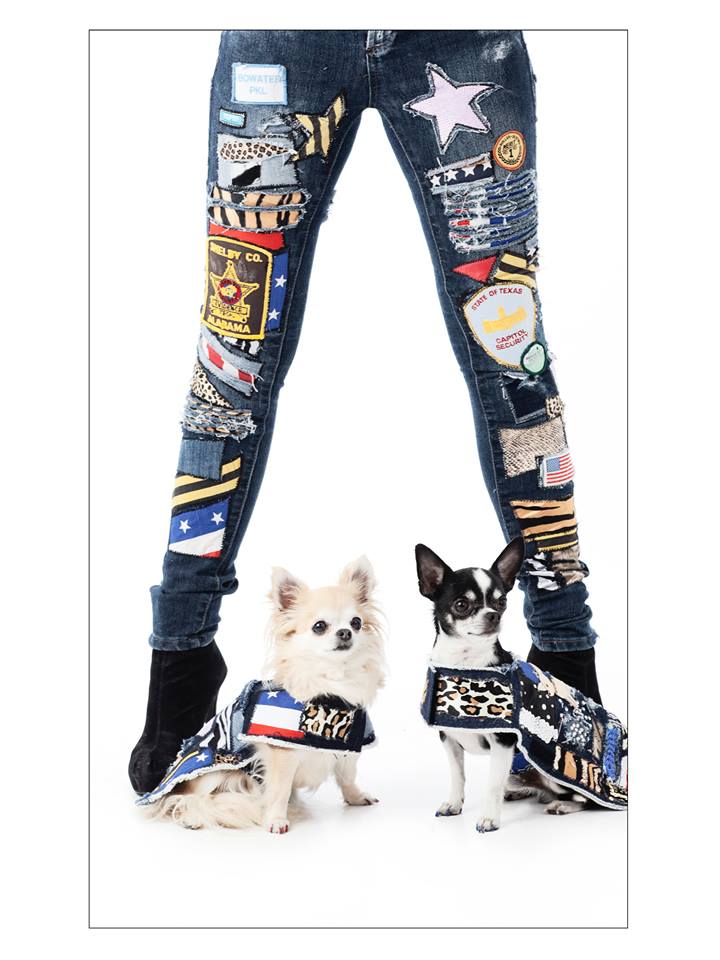 Of course being a working mum means Marie’s time is split between her designs and her children, but she says that’s been a positive aspect to her journey, allowing her to take time to perfect her craft before taking it to market.

She said: “It has been challenging being a working mum but I feel very lucky to have been to develop my start up business from home. I have deliberately grown the business idea slowly so I could spend the first four years of my daughter’s life together and help my son through his final school years and the transition to University.

“Darcy is now starting primary school in September and my son Shea will be starting his second year at Manchester Uni. My kids are my life and I am so proud of both of them.

“I feel I have given them an excellent start in life and am now ready to dedicate more time to TitanicDenim and take it to another level. I’m now seeking investment to be able to take this to the next level.”

What’s next for Marie?

“We’re now at the stage where we are actively seeking investment so that we can move the brand forward and not only grow the Belfast production team but begin exporting throughout the world” she revealed.

Backstage with the stars

WHEN it comes to working backstage Marie has literally seen it all.

But tight contracts mean she’s sworn to secrecy about the behind the scenes world of music.

Often working at the SSE Arena in Belfast and O2 in Dublin Marie’s list of celebrity credits is extensive.

As well as that Marie’s local credits are impressive having already worked with everyone from Duke Special and The 4 Of Us to Soak.

And concerts aren’t the only backstage work Marie does, she can often be found sewing and dressing at massive touring productions such as We Will Rock You and Disney On Ice.

She said: “For every artist my typical role is different, but the main roles are preparing their costumes and that of their dancers or musicians.

“Sometimes I would help to organise the artists room, setting it up to a particular standard.

“The room is organised on every destination to look the same so that it is homely and comfortable for the stars.

“The same fabrics etc are used on the walls and furniture and a lot of the artists have personal items and family pics that they like placed in their room.

“In shows where they’re in the middle of a tour or appearing more than one night I may launder or repair garments too, it’s not all glamorous.

“However, for Usher I was asked to cut up and old fur coat and put it into one of his bomber jackets as lining.

“If it’s the start of a tour we would also help make mic packs for costumes and doing the final alterations.

“And then of course during the show we will ensure all the garments are ready for use and help dress dancers, acts or aid with quick costume changes during the show.”