Lush! nightclub at Kellys Portrush has packed in music lovers for two decades and this October will celebrate its 20th birthday with an event never before seen or heard in Northern Ireland.

The biggest floor fillers ever heard at Lush! will be performed by the Ulster Orchestra at a special celebratory event at the SSE Arena in Belfast.

The 70-piece symphony orchestra will be joined by some of the most famous DJs on the planet for a once in a lifetime event, which will push the boundaries for live events in Ireland.

On Saturday October 15 thousands of party people will hear some of the greatest dance tunes of all time played with a classical twist on a thundering purpose built sound and lighting rig.

Curated by Brothers In Rhythm (Dave Seaman and Steve Anderson) alongside Lush! co-founder Col Hamilton, the night will feature special guest DJ Seb Fontaine and be compered by Lush! legend John Cecchini, with some special live vocalists, soon to be announced.

In this exclusive interview, co-founder of Lush!, Col Hamilton talks to BAM about the event.

Hi Col! So how did this classical dance combination come about?

The idea came about like all the best ideas, after a few drinks listening to awesome tunes. I was listening to Pete Tong’s BBC Radio One Ibiza Classics live from the Albert Hall, which they did last year, and literally had goose bumps on my arms!

So at that moment I just knew that we had to do our own Lush! version to celebrate Lush’s 20th birthday. The very next day we got a date in the diary with the Ulster Orchestra, who also loved the idea, and the idea was born from there.

What classic dance tunes can we expect to hear on the night?

I can’t give away any of the track list as we want it to be a special reveal on the night, but suffice to say the absolute classics like Faithless, Insomnia etc will all be showcased like never before.

We have spent a lot of time selecting the best floorfillers that have become absolute classics in Lush! over the past 20 years.

What have been the best moments in Lush’s 20 year history?

Its hard to pick the best out of our 20 year history as there have simply been so many that we just sit back and go “wow!”. The first ever Radio One Essential Mix way back in 1997 with Pete Tong was legendary and without doubt goes down as one of the best club nights ever in Northern Ireland.

Sasha & Digweed playing back-to-back many times were also legendary. The Essential Millennium Mix Live on Radio One was also a ground-breaking event with over 7 million people listening live on the night. I could go on all day! 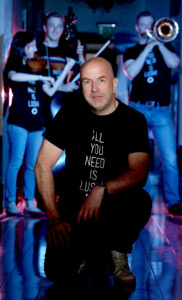 Which DJ’s/vocalists/special guests will be making an appearance?

Again we are keeping that under wraps until the night but I can give you one little taster….Maria Naylor will be singing the Classic Sasha & Maria-Be ‘As One’ live.

We have spent so much time working on the track list that we are almost bursting with excitement and know the audience will go mad when they hear the tunes on the night.

Has there ever been any event of this kind before in Northern Ireland?

No, this is the first time this has ever been attempted in Northern Ireland and Lush! are proud to be the promoters to bring it to Belfast.

The amount of PR, pre-planning and musical planning that it takes to host a 70-piece orchestra with DJs and sync it all to an electronic 4/4 beat is mind boggling…not the type of thing that you would be doing every week, put it like that! But the result will all be worth it.

How has Kelly’s complex evolved over the years?

As the kids each year find new DJs and music styles that suit their era, we have done the same. At the end of the day, its still a big room playing great music!

Where do you see Lush! in the future?

Well we are celebrating 20 years this year for Lush!, and if you had told me that back in 1996 I would have thought you were mad! So who know’s where we will be over the next few years.

We are still pulling in hundreds, sometimes thousands, of clubbers every week, the big name DJs are still playing and whilst time and music and trends may have moved on the club ethos remains the same.

Where can people find out more about the event?

All info is on the event page on Facebook (click here for more info). Tickets are available from all Ticketmaster outlets online here.

Anything else you would like to say to fans of Lush?

Hopefully we will see you all there on the night, but I would advise anyone who plans to buy a ticket to do so soon as they are limited and we have sold Over 50% already… Enjoy the event!