When a teen from Newry and his friend posted a video of himself playing songs by ear on a piano in Matchett’s Music Shop, Belfast, he never expected what came next.

Daragh McSloy, 16, played songs requested at random by his friend Stephen and showed his extraordinary talent for improvisation and playing by ear.

The video subsequently went viral with over 50,000 views after being shared on Cool FM’s Facebook page. Daragh spoke exclusively to BAM about the impact of the video’s success and his future musical career plans.

“I’ve been singing and playing guitar for just over two years and writing music ever since.” he said. “I’ve been playing piano since I was 6 years of age. I also play drums, percussion, whistle and violin on the side.”

His natural aversion to reading music has massively worked in his favour. Daragh said: “I’ve completed up until Grade 5 with piano but I can’t read music. I stopped lessons about two years ago and continued by ear, everything else such as guitar, singing and drums are self taught.”

Music was always going to be a part of Daragh’s life. He played backing piano by ear for his school choir as well as at feis’s in Newry and Warrenpoint. 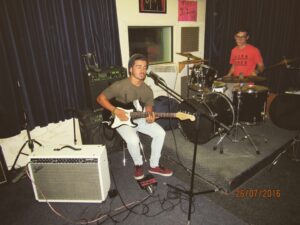 He said: “I play a wide range of music in my own style by ear but never use sheet music because I like to experiment with combining styles…Blues, rock, inde pop, folk music. A big influence would be Ed Sheeran.”

The young musician is focused on a career in music and has dedicated his time to busking regularly and playing local gigs.

“I was busking in Newry, Hillstreet with my guitar while singing (and playing a tambourine with my foot!). I then took a bus to Belfast to busk in Victoria square but it wasn’t going well as there were too many other buskers and noise with a lot more equipment than me.” he said.

“So I decided to make a piano video in Matchett’s Music shop in Belfast, selecting random songs with my friend Stephen Burden from his music playlist on his phone to put on my Facebook page.”

The video quickly went viral, with thousands of shares including one on Cool FM’s Facebook page. 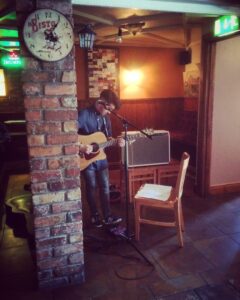 Daragh said: “I couldn’t get over it! It was such a momentous occasion and a shock to the system. I’m so grateful for everyone liking and sharing to give me that extra bit of publicity, it’s opened up so many doors and opportunities. I’m just over the moon!”

Daragh’s video has certainly opened him up to more opportunities and he has been inundated with media requests.

“I’ve been approached by a producer from ITV looking to have me on prime time TV which is insane. A producer from AM:TV3 Ireland wants me on their show aswell.” he told us. 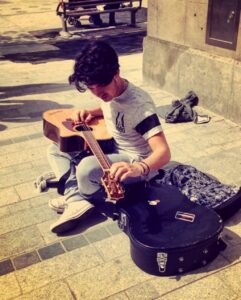 “I aim to play all my original songs and bring them to life with an original loop peddle, lead key bored, lead guitar, rhythm guitar and jazz drum set up. I am also planning to produce an album entitled “Puffy” for Christmas, recording and producing the songs myself from my room.

“A goal of ours would be for Paul and the Meanie to play Sea Sessions 2017. That would be amazing and with hard work and dedication I believe we can do it, with out a doubt. I’m doing small gigs and busking to save up for equipment and gear for the band.”

Daragh and Cormac are attending SRC Armagh in September to complete an HND in Music to advance their knowledge and skills. From there, the sky is the limit and we could well be seeing them at next year’s Sea Sessions