Belfast comedian Tim McGarry is back on the road again. 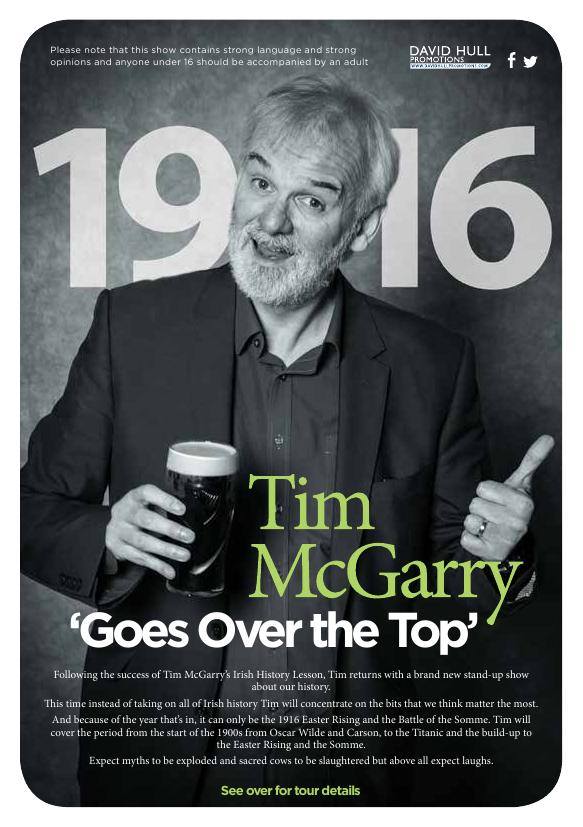 Following the success of his tour Tim McGarry’s Irish History Lesson, the star of BBC’s Blame Game, Give My Head Peace and The Hole In The Wall Gang Tim returns with a brand new stand-up show about our history.

This time instead of taking on all of Irish history Tim will concentrate on the bits that we think matter the most in Tim McGarry Goes Over The Top. And because of the year that’s in it that can only be the 1916 Easter Rising and the Battle of the Somme.

In 2016 we have been inundated with worthy and serious dramas and documentaries about the meaning of 1916. There has been much chin stroking and nodding of heads sagely. Tim doesn’t want that. He wants to give you jokes.

What are the funny myths and facts about 1916? Why do we take our history so seriously? And how can we stop taking it seriously?

The Hearts and Minds and A Perforated Ulster star will cover the period from the start of the 1900s from Oscar Wilde and Carson, to the Titanic and the build-up to the Easter Rising and the Somme.

He will ask serious questions, like – What can we learn from 1916? What would the people of 1916 think today? How the hell can we know? And frankly who cares? Is it a good idea to take our current political views from what happened a century ago? And what will be remembered in 2116?

Expect myths to be exploded and sacred cows to be slaughtered but above all expect laughs.

And who knows we might accidentally learn something along the way.

For ticket information and tour dates check out www.ents24.com/uk/tour-dates/tim-mcgarry