British Ski Jumping Legend Eddie ‘the Eagle’ Edwards was in Belfast on Saturday for a flying visit. Fresh on the back of a recently released film about his life, Eddie spoke to BAM about: Coping with fame; strong feelings towards the British Ski Federation; some of his darker moments…and selfies with Hugh Jackman.

Sitting down at the Ski Centre’s Alpine Bar, Eddie is sporting ski attire and an eccentric pair of spectacles. He’s here to mark the launch of We Are Vertigo’s Ski Season.

Speaking with what is clearly genuine enthusiasm for his visit, Eddie is impressed with what he’s seen so far today: “It’s incredible. This is a remarkable place.”

Describing the facilities on offer at the South Belfast family hub as something “never seen anywhere else in the UK”, Eddie knows from experience the importance of getting kids interested in skiing at a young age.

Growing up close to Gloucester ski centre, combined with a school skiing trip abroad, Eddie caught the bug at a young age. “I think I took the adrenaline junkie label from my dad – he’d been in the army and had driven tanks. I’m really just as excited to put a pair of skis on today as I was when I was 13.” he said.

Eddie is a popular and beloved public figure, with his heroics in the ’88 Winter Olympics cementing his name in Ski Jumping history. His appearance at those Calgary Games drew a lot of media interest, not all of it positive. “It must have hurt,” I suggest to him. But his response is typically pragmatic:

“No…not really. Personally, getting to those games was my greatest achievement, and I couldn’t control what the press said about me. My dad was a builder, mum worked in an office. I had no sponsorship. I just hoped that somebody out there might read my story and say, ‘Hey, this guy could do with a bit of money’, and that would hopefully help me get better and better”.

This humble, and deeply likeable, attitude comes from a rich tapestry of life experience.

Eddie reveals that his worst moment on the ski slopes came when he was 17, as he suffered horrendous injuries that left him with a broken neck and back. “I was racing a guy down a mountain. But we collided and hit a tree. It was one of my darkest moments…I wasn’t sure if I’d ever be able to ski again.”

The road to skiing success was paved with plenty of difficulties. Eddie said: “There were loads of tough times; sleeping in a car, scraping food out of bins, sleeping in a rundown psychiatric hospital in Finland when there was no other accommodation available. Those things were hard…but they were interesting as well.”

It was during his time at the Calgary Olympics that he was christened “The Eagle”.  “It just blew out of control. It got to extent where I got more attention than the guy who won the event!” he told me.

How did he cope with suddenly being thrust into the limelight? “There were moments when it got a little too much…being bombarded, constantly asked for autographs and questions all day every day, 24 hours…I’d lock myself away in a hotel room”. Eddie said.

Interestingly, for a man so relaxed and at ease, Eddie has plenty of ire for the big wigs of British Skiing: “Years ago, when I was at the Olympics, they seemed to think it wasn’t their job to promote the sport. That’s crazy! Looking back, I felt money given from sports councils and that kind of thing went straight to the men at the top. The BSS (British Ski and Snowboard) is the same. There’s nepotism and all of that. Nothing’s changed. The money has to start trickling down to the athletes and something really needs to be done.” 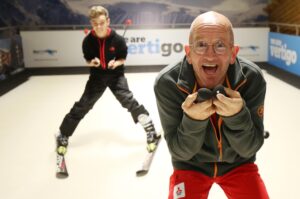 In 2013 director Dexter Fletcher saw Eddie’s winning appearance on ITV’s ‘Splash’ and knew there was a story to be told. Eddie is full of good cheer as he reveals the moment he found out that his life story was to be made into a movie.

“I was really excited! Then they said: ‘We’ve got Hugh Jackman on board’. I thought, ‘Wow…Hugh Jackman’s going to play me!’ And Matthew Vaughn (producer) said ‘No, no, no, no – he’s the coach’. I was gutted!” he said.

“There were two properly surreal moments. I was out shopping with my children in Stroud, when suddenly Hugh Jackman himself – this Hollywood A-Lister – phoned me on my mobile for a chat! Another time I was visiting the set, and he just sprinted over, shouting ‘Eddie, Eddie…I want a selfie!’ The whole film was a weird experience…incredible. It was like Calgary all over again.”

Away from the fanfare of ‘Eddie the Eagle’, Mike – his real name – says he still enjoys working as a plasterer and general builder.

So can he, I wonder, recommend a good technique to ensure a smooth finish when applying plaster to a newly constructed wall? Laughing, Eddie said: “Don’t use too much water. That’ll give you a marble, glassy finish which you absolutely do not want!”

Crucially, I ask, is he going for a pint afterwards? “Not unless you can provide me with some English cider?”

Ah well, another time then.

More importantly, Eddie finishes with some sage life advice: “Never, ever give up. Whether it’s sport, academics or business. No matter how unlikely it is to happen, never lose sight of that dream. Keep the head down and keep plugging away. Dreams do come true!”

And so with that, Eddie, The Humble Hero, picks up his skis and walks off, into infinity and beyond.