Game of Thrones storyboard artist William Simpson recently revealed to ThroneWatch that he would love to draw Tyrion Lannister on the Iron Throne.

Speaking to BAM columnist Abby Williams at Belfast’s Titancon 2016, William said: “For me, he is just the hero of the story.”

Currently drawing up the incredible Game of Thrones imagery that transfers to our favourite on-screen scenes, William has been the show’s storyboard artist ever since the original pilot: “I have killed everybody!” he said.

But William’s career certainly did not start with Thrones. He told us: “My first very big movie was “Reign of Fire” with Christian Bale and Matthew McConaughey down in Dublin.

“Just before Game of Thrones I did “Your Highness” starring James Franco, Danny McBride and Natalie Portman, I worked on the vampire movie “Byzantium”, “Halo”, a movie called “Morgan”, and also “Unknown” with Liam Neeson in Berlin. There’s been lots of things over the years.”

Away from the big screen William has also worked on some iconic comic book series including Big Ben for Warrior, Batman, and Hellblazer for DC Comics.

He said: “I drew as a child and I kept on drawing. I did a Foundation year and at the end of it I was really confused. I went away and did landscape portraits for a while, eventually I got into doing comic art work, and then I drew comic strips for years and years.

“Actually, my first job was a Knight Rider colouring book. Then I went on to do Transformers for British Marvel, Universal Soldier, Judge Dredd, 2000AD, Dark Horse Comics. A lot of stuff.”

Game of Thrones fans may know that there was an un-aired pilot of the show back in 2009. Speaking about the process of taking drawings from storyboard to screen, William said: “It’s a big process. I remember season one when I had worked on the revamp, because the pilot for Game of Thrones was done but nobody ever saw it.

“I drew out meticulously the opening where we meet the White Walkers in the first twenty minute teaser for everybody who was going to watch the series. My friend Colum was looking through my book of storyboards that I try to keep as a compilation of my work and he said, ‘Oh, my god. This is shot for shot!” And it was pretty close. 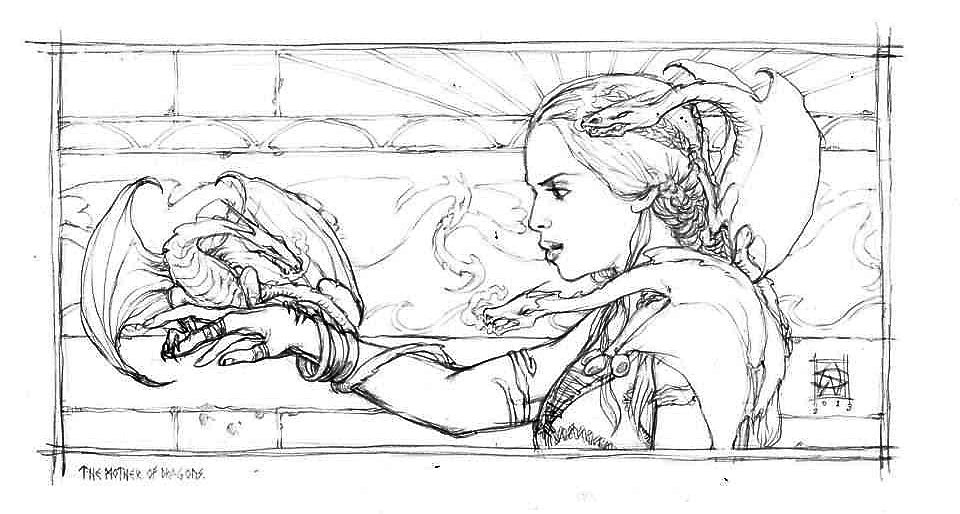 Daenerys Targaryen and her dragons, drawn by William Simpson

“So, with the work that I do, a lot of it is trying to work out the problems that are going to be faced whenever we actually get onto filming a scene. It is a still version of the show.”

Having survived the last 6 seasons (albeit off screen, which is apparently safer in GoT land), William is keen to see the show through to the very end.

“This is my eighth year on the show and they keep asking me back, which is lovely. We have another season to go for sure and I would like to finish it. My resume will be Game of Thrones, Game of Thrones…and some other stuff.” he laughed.

“Normally I get to work on a movie during the year because I am on Thrones for five months at a time. I was meant to be working on The Blob this year but it fell through. They were remaking the Blob but we don’t know what is happening. That would have been great fun.”

And when it comes to drawing up those highly-anticipated final scenes, it’s Tyrion that William hopes to sketch onto the Iron Throne.

He said: “The rest of the characters are all fine and dandy and they have their reasons for doing what they do, but Tyrion is the only sound human being in the whole thing.

“Let him be there on the Throne. And hopefully alive! If he died it would just ruin the whole thing. This is the show’s favourite character, he has this back bone. He is brilliant. For me, he is the one character that represents every person. He is the downtrodden character, he is literally the small guy in the show.

“He is the normal person who gets blamed for everything. Whenever he does something good, the kudos is given to somebody else. He is this common identity and he has such depth. He is always trying to do things for the right reasons, even when he is pissed out of his tiny mind.

“When you meet Peter (Dinklage) and see him working he is the most amazing actor. Watching him on set, he is phenomenal.”

We’re praying to all the Gods that he makes it, too. #TeamTyrion