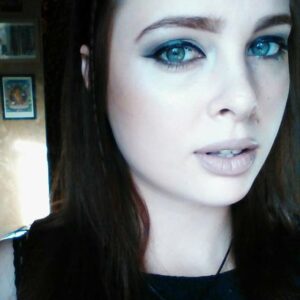 Writing for BAM since it was founded by Tina Calder in August 2015, Abby launched her regular Game of Thrones fan column “Throne Watch” at the beginning of 2016, became Contributor’s Editor in May and was recently made co-owner of the magazine.

Abby has contributed numerous articles to BAM in the areas of mental health, entertainment and human interest, and has interviewed several Game of Thrones actors including Kerry Ingram, Ron Donachie and Dominic Carter, as well as various musicians, performers and YouTube stars.

She said: “It’s really flattering to be nominated for anything. I am hugely passionate about #ThroneWatch and all the work I do with BAM, so it was really surprising to be recognised for it in this way.”

In January 2016 she published her first novel “Tripping” with Excalibur Press (also publishers of BAM Mag) which is available on Amazon and excaliburpress.co.uk/store/products/tripping.

“I am currently writing another novel and also a non-fiction book which deals with managing OCD and anxiety; fusing cognitive behavioural techniques and personal experience with meditation practices and an all round holistic approach.” Abby said.

Spending much of her early 20s dealing with chronic mental health problems, Abby has worked to overcome many obstacles in order to do what she loves.

She said: “I always loved to read and write. Communicating and creating in this way comes naturally to me and I hope to reach out to people in doing so by making them think, making them laugh, or simply even sharing something that a reader somewhere will relate to.

“Game of Thrones has become such a huge part of NI’s film and TV culture and our economy has benefited considerably from the show. It has brought a new focus on the arts, production and the filming industry here, which is a core factor of any thriving society.

“Plus, it’s an amazing show that will go down in history with the likes of Lord of the Rings and Harry Potter. I’ll probably be writing about it long after the last season ends!”

Hundreds of entries were evaluated by independent judges to make the shortlist which includes nominations for Business Of The Year, Fashion Retailer Of The Year and Woman Of The Year.

The selection process will culminate in a red-carpet gala ceremony on Saturday 19 November 2016 in The Galgorm Resort and Spa, Ballymena, which has been called “the Oscars of the independent business sector”.

Local Women Business Awards has now established itself as the go-to event of the year, as well as a prestigious hallmark of retailing excellence. Their aim is to help recognise the multiplicity of talents within NI’s retailing sector and especially the female-led businesses that are the heartbeat of NI’s commercial sector.

Abby has been shortlisted for Rising Star Of 2016 and will be up against 5 other nominees in her category. The winners will be announced by independent judges at the Local Women Winter Ball 2016 on November 19.

Check out #ThroneWatch here, connect with Abby on Facebook www.facebook.com/AbbyWilliamsAuthor or see localwomenmagazine.com/winter-ball for more information.