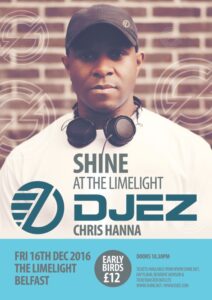 Recognized in the music industry and public alike as “The Best” garage DJ to have graced the planet, he is saluted by fans for being one of the most creative mixers with both instinct and technical prowess, not forgetting owning one of the quickest fingers in the trade.

At the age of 15, DJ EZ started his musical career as a pirate radio host. From this came a passion for music which grew deeper and deeper, and so has his international fame.

After many years of performing marathon sets to the masses, DJ EZ wanted to give something back to those less fortunate than himself. On the 10 February 2016, the North Londoner announced to the world that he had set himself the ultimate challenge of playing a non-stop, 24-hour live DJ set to raise awareness for Cancer Research UK.

A limited amount of early bird tickets for DJ EZ at The Limelight on Friday 16 December with support from Chris Hanna are on sale Thursday 27 Oct 9am priced £12+bf.