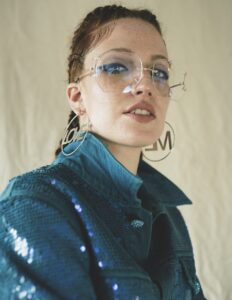 In 2015, Jess Glynne’s debut album “I Cry When I Laugh” became the biggest selling debut of the year – going platinum in the UK in only 10 weeks and being one of only two British female solo artists to have five consecutive UK number one singles.

“I Cry When I Laugh” features all her hit singles including “Right Here”, “Hold My Hand”, and “Don’t Be So Hard On Yourself”.

Jess describes the day that she signed her record contract as “the happiest and saddest day of my life.”

Professionally, she had come of age, earning the respect of an industry she’d fought long and hard to win a place in and here was the proof that her talent for singing, song-writing and performance were ready for their close-up. Personally, she was in pieces – broken-hearted from a two-year relationship that made her question everyone and everything.

However, there is more than one musical way to skin the heartbreak cat and with her debut album Jess Glynne is exploring the options.

In the decade passed since Back to Black, the British pop narrative music has cultivated a side-line specialty in albums documenting the wrench of broken love. The break-up album is now its defining motif. When she began documenting her exact feelings in song for “I Cry When I Laugh” – a deliberate duality that speaks directly to her demeanor in person as in song – Jess Glynne decided to take an alternative, circuitous route to the searing piano ballads that are now our national pop default position: “I wanted this record to be about hope.” she said.

The four songs at the heart of “I Cry When I Laugh” are divined from one rewarding, traumatic, consuming affair. “Hold My Hand” you will already know – a genuine sales and radio goliath with such a reach that it has turned her from being the noticeable feature at the frontline of Britain’s urgent appetite for pop-house bangers into a proper homespun superstar.

As a song, it feels as it speaks; an anthem to positivity and personal communion, written with Jess’s most consistent collaborator and musical soul sister, Janeé “Jin Jin” Bennett. It is also the key to unlocking the other key tracks.

“Don’t Be So Hard” is about painting a smile on while “Gave Me Something” is about always thinking you’ll be a certain kind of girl and then turning into something else. And then “Take Me Home”, the most downbeat track on the album, is about being able to revisit that sad moment. She allowed herself one ballad, after all.

One of the albums closing tracks – “Saddest Vanilla” – sees Jess singing alongside multi-million selling British pop-star Emeli Sande, the only artist to feature on the album.

Tickets for Jess Glynne plus guests at Ormeau Park, Belfast are available at www.ticketmaster.ie