Many of us know that local inventor Harry Ferguson not only pioneered the tractor but also built an aeroplane. But how many of us are aware that a woman from Carnmoney designed, built and flew her own plane, making her the first woman in the world to do so? 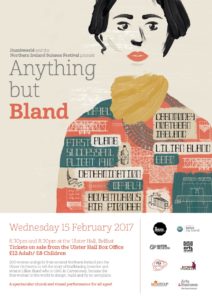 Her name was Lilian Bland and she is the hero of a new choral and musical performance which will open the Northern Ireland Science Festival on Wednesday 15th February at the Ulster Hall.

Anything but Bland has been written by John McIlduff, along with new music composed by Brian Irvine. It will be performed by the Ulster Orchestra and a 200-strong female community choir of all ages.

Writer John McIlduff said: “Lilian Bland is a fantastic figure and very few people know about her – we thought it was time to bring her story to life, give her some recognition and hopefully inspire the next generation of young engineers and scientists. She was one of the original global female innovators, an extremely talented engineer and in modern terms, she was one seriously kick-ass woman – she certainly broke the stereotype mould in the late 19th century!

“After the death of her mother in 1890, young Lilian moved to Carnmoney, Co. Antrim with her father. She dressed in trousers, she smoked, drank and taught martial arts including Ju – Jitsu. She was a talented sports journalist and photographer.

“She was about as non-conformist as they came and she didn’t let gender boundaries restrict her ambitions! She tried to obtain her jockey’s license and continually applied to race in the Grand National, but was rejected on the basis of being female.

“In early 1910, Lilian spent most of her time in a shed in Carnmoney, constructing a glider, naming it ‘Mayfly’, saying philosophically, “it may fly, it may not fly.” She cobbled together spruce, bamboo and other materials and the controls were formed from recycled bicycle handlebars. In spite of success with the glider and true to her ambitious streak, she wanted to give it some more oomph and realised that an engine would be the answer.

“After ordering a two stroke engine which arrived without a fuel tank, Lilian, resourceful as ever, used an empty whiskey bottle, decanting the petrol in it through her deaf aunt’s ear trumpet. Unsurprisingly the aircraft failed to take flight that day.

“However, equipped with a real fuel tank and piloted by Lilian Bland on August 31st 1910, Mayfly flew approximately 30 feet at a new test field at the Deerpark Estate in Randalstown. Her diary records that a temperamental free-roaming bull on the Estate, named Ferdinand, provided some extra motivation to help get Mayfly airborne!

“Highly alarmed by his daughter’s passion for aviation, Lilian’s father promised he would buy her a new car if she gave up flying. Lilian then taught herself how to drive, collected one of the very first Model T Fords in Dublin and drove it to Belfast. The following year, she was running a car dealership in Belfast where she became Ford’s first female car agent in Northern Ireland!”

Writer John McIlduff said: “Lilian Bland continued to innovate throughout her life and our new production is centred around Lilian’s inspiring, colourful and often eyebrow-raising story.

“She didn’t see the need for marriage or for a man in her life – but she did eventually marry, and she had one child, a daughter, whom she named Patrick, having hoped she would have a son. We simply love the story of Lilian and we hope the audiences will be both entertained and inspired by this wonderful story of early girl-power.

“Brian Irvine’s new choral composition brilliantly captures the riotous energy of Lilian’s character and with the support of the Ulster Orchestra, this will be a performance – aptly named “Anything but Bland” – not to be missed.”

Anything but Bland will open the NI Science Festival on the evening of 15th February at the Ulster Hall. There will be two performances at 6.30pm and 8.30pm and tickets are available through the Ulster Hall costing £12 for adults and £8 for children.