A new £1million state-of-the-art Tesco Express has opened this week on University Road Belfast – on the site of an iconic Belfast pub, The Elms, later known as The Globe. 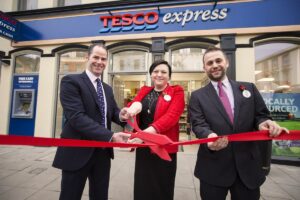 Once part of the Botanic Inns empire of pubs, the landmark building officially closed its doors in 2013 and has remained vacant ever since.

Years of speculation were put to rest as Tesco NI officially opened its new store on the 14th of February.

Tesco NI has invested more than £1million in the new store, which will feature one of the biggest sandwich and on-the-go range of any Tesco Express store.

The store is also the first to feature card-only self-service checkouts, with a view to offering its customers a more convenient and unparalleled city centre shopping experience.

The new opening will create 14 new jobs and is testament to Tesco NI’s growing presence in Northern Ireland and builds on the findings of a 2016 independent economic impact report, which estimated a 5.7billion contribution by Tesco NI to the local economy in its 20 years here.

Continuing its long-standing support of local producers, the new store will be abundant with Northern Irish produce including locally sourced meat and a variety of fresh fruits and vegetables.

Similarly, the new store will feature a beer, wine and spirits section which will offer an array of choice for customers, including locally sourced craft beers, ciders and spirits.

Tesco Express University Road is Tesco Northern Ireland’s 19th Express store – offering the choice of a larger Tesco store, but with the convenience of being city centre based.

The new store is uniquely positioned to avail of the high numbers of students, professionals and commuters that pass-by on a daily basis.

Commenting on the store opening, store manager, Alexis McIlveen, who has worked with Tesco NI since 2010 said: “We hope to see high numbers of customers due to its central and iconic location. The store is designed with customers in mind and will particularly cater to the on-the-go shopper, to give them a convenient and pleasant shopping experience. We look forward to welcoming new customers to the store in the coming weeks”.