When it comes to being creative Belfast artist Aaron Hughes is almost famous on the local scene.  From music and sculpture to fine art there’s nothing he isn’t good at.

In recent years the 29-year-old has begun concentrating on his portraiture work using pencil, pen and charcoal.  As a result he’s already accumulated quite an impressive following and back catalogue of work.

Until the end of February Aaron has an exhibition called Belfast Traits showing at the John Hewitt bar.  He will also be showing work at the Studio 11 exhibition in Belfast on February 23-24. 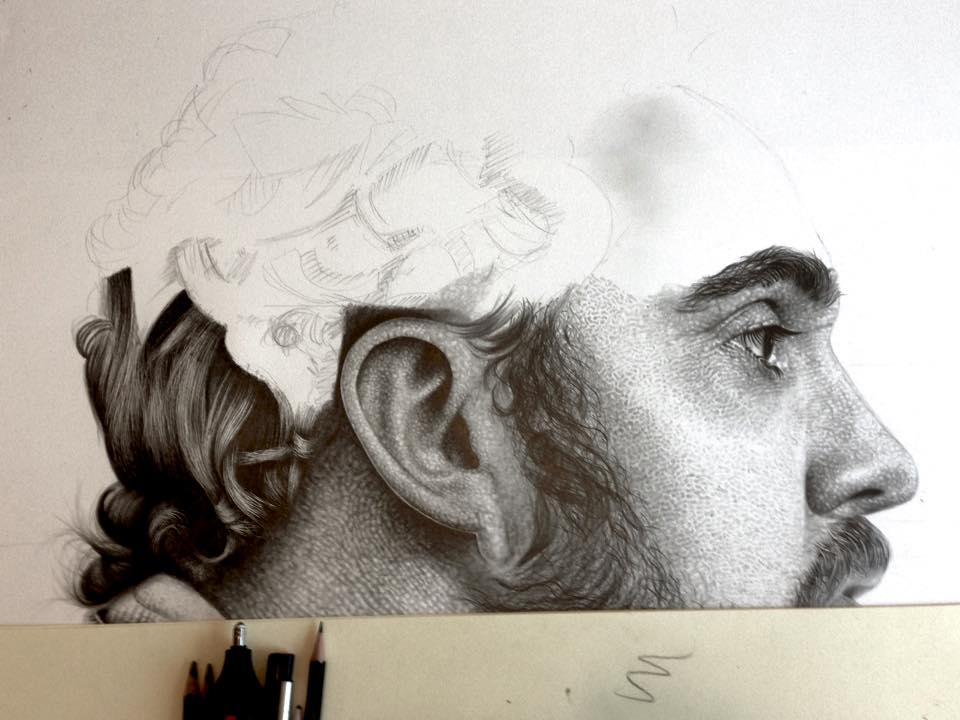 Get to know more about Aaron:

How did you get started in the industry?
“It was always an interest of mine until recently i decided to focus all of my time on it rather than split time between a job and other hobbies. I couldn’t see it as a possible full time practice until now.”

What genre / style do you create in?
“The style I would say is fine art.  I don’t try to recreate from photograph exactly for it to be photo-realism or other movements /category’s that I’ve been assigned.”

What would you be best known for?
“Pencil or pen drawings of people.”

What would you consider your biggest achievement?
“Teaching myself the violin…so far I have only broke three.” 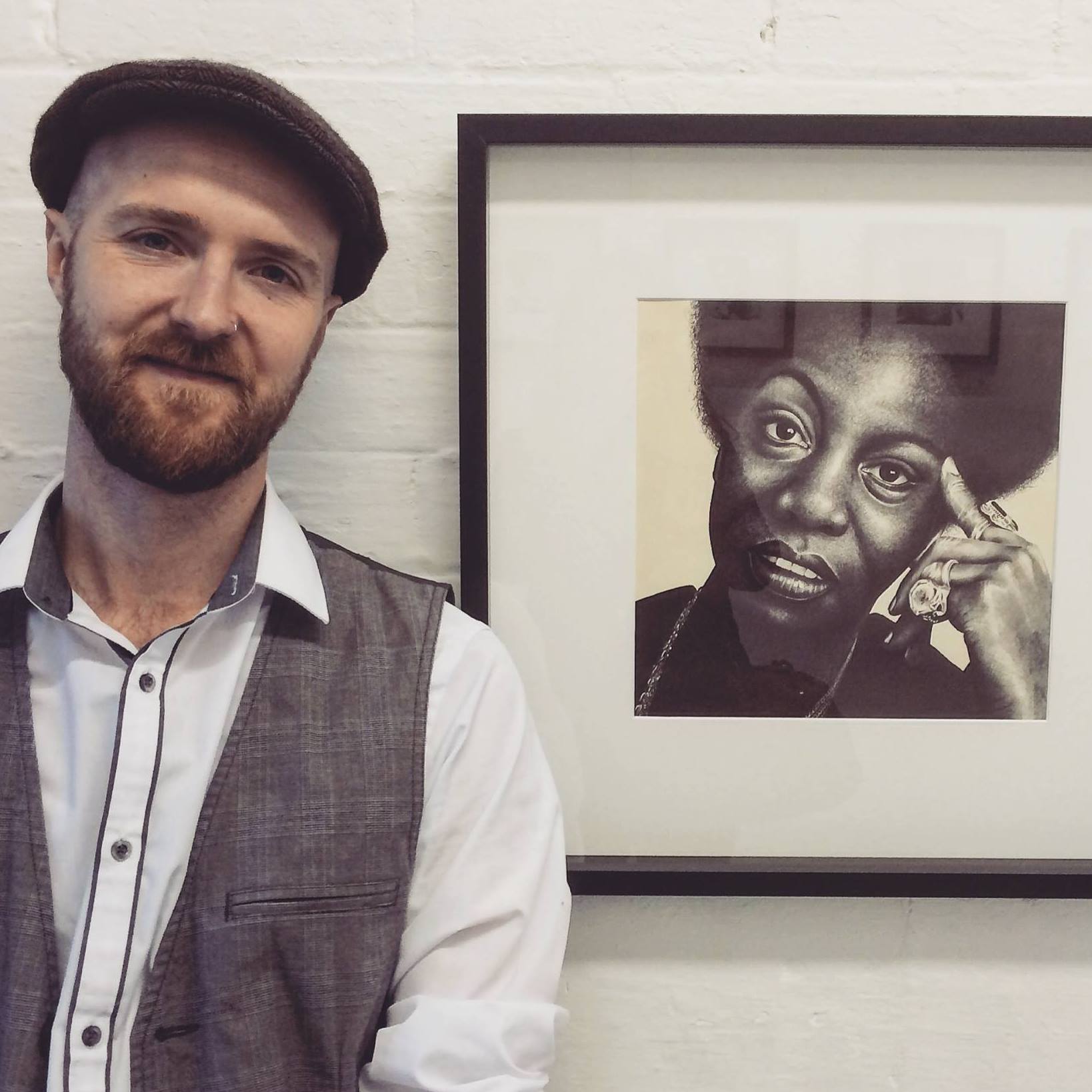 What would you consider to be the biggest lesson you’ve learned in your industry?
“It’s my practice, it’s my work and so it’s my opinion I should listen to. Not that other people’s opinions are always bad or don’t matter but rather I know now I can ignore them if I like. Also I think learning time management or resourcefulness have been important lessons.”

What has been your biggest challenge to date?
“Here we go!  The overcoming fear of failure Cliche! The reason for that is because it’s true.  Put yourself out there ready or not, becoming skilful should be the challenge but that is just a side effect of persistence.  The big challenge is patience and believing that what your art is and all it needs to be, is yours.”

Tell us a little about your personal life, are you married, kids, hobbies etc?
“I would have called myself a socialite but really I prefer to be alone and I need to be to do my work. A  full week would go by I wouldn’t have left the desk #lies #sleep #pub, I don’t know what day it is. . oh Wednesday..  #completely irrelevant . So yeah, the day starts create art, stop for food then practice some music.
“I usually have a documentary on while I draw or music, audio books are great too. Romans, Greeks, Egyptians, monarchs, revolutions, physics, literature, empire, Ireland and sharks just give me a decade anywhere I’ll be interested in it. Music.. anything really rock or classical …anything with strings.. jazz, funk, electropop or wherever the mood takes me.
“Epic battle music for an alarm clock to get me out of bed.” 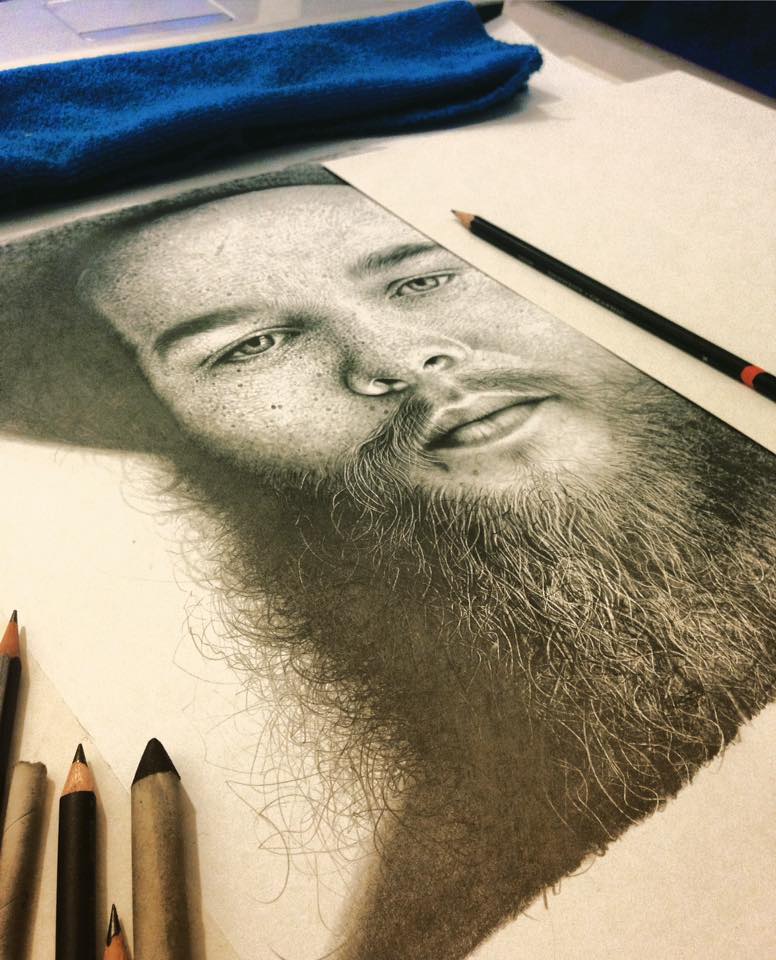 Tell us about your most recent work?
“It’s called Traits and because I have been fascinated with portraiture for very long time. I chose to explore my surroundings through drawing the familiar faces I see.  It’s a series of drawings of the people I see enough to become part of the brickwork or the personality that I would characterise Belfast as having at this moment in time.
“It will be a long project and will evolve the pencil drawings but the theme will remain a Belfast project. I believe being an artist is a search in the same way philosophy or science is a search, every observation can be a discovery and each discovery can lead you on a different path of understanding. So I start here in the beginning each subject has a link to the another and i’ll see where it takes me, maybe i’ll draw everyone but the point is to capture apart of my experience in the world and up until now Belfast is my world.”

PLUG !! What would you like us to tell people about?
“I plan on moving this show around the city so the artwork becomes as much apart of Belfast as it is about it. Running in The John Hewitt from until the end of February and more showings after that to be confirmed.” 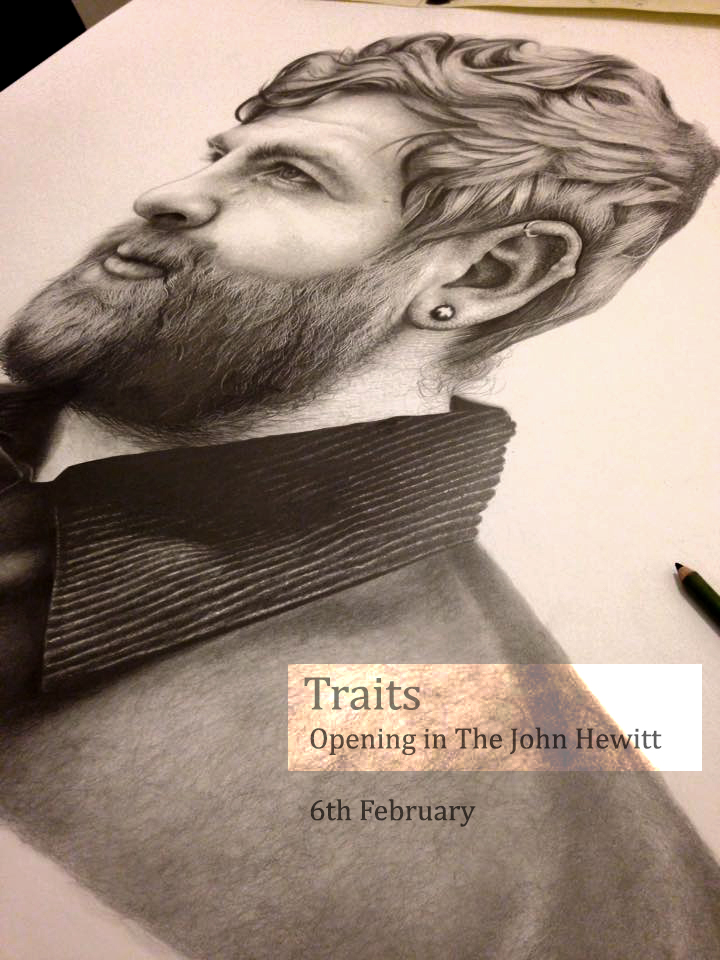 If you had to describe your work to someone who has never heard of you what would you say?
“Belfast drawings of Belfast…people.”

What’s the funniest experience you’ve had in your business?
“I’m quite a serious person, so I don’t laugh. I’m just kidding but really I cant think of anything  I  cry mostly.”

What would your advice be to young people hoping to pursue the same industry?
“Avoid all forms of negativity. When it comes to art there are so many ways of looking at it. My own personal vision involves consistently working regardless of anything else in way. I know that doesn’t apply to everyone’s process for creating art.
“My passion for it keeps me moving, so I guess if you decide that you want to do something like this understand it may not be possible to have it as career right away but if your serious and are willing to put in the necessary time anythings possible.
For me making a lot of money would be great but it isn’t necessary, I will do this regardless. It’s simple, the question is are you passionate about it? .. if yes, whats stopping you?” 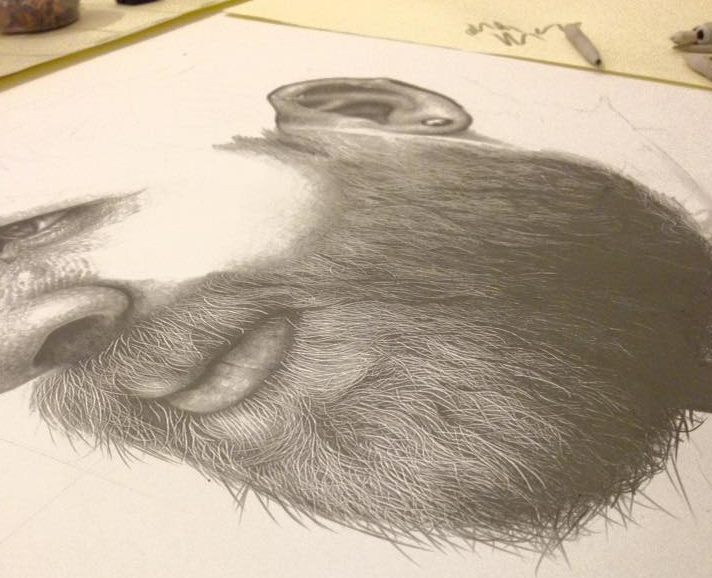 Anything else you want to tell people about yourself or your work?
“The drawings have a particular detail to them I haven’t copied everything straight from photo reference. In fact  you will notice in some I have taken a sort of map like approach to the skin texture, so in exploring each portrait I want to direct the viewers eye along the lines as they would study map.
“So far I am working with photographers Emma Gornall, Matthew Alexander Patton and Patrick Kelly, without them I wouldn’t have been able to get the ball rolling as much as I needed to for this first showing, so a big thank you to them and to the the models who have taken part so far.”

Who do you look up to and why?
“Anyone who spends their time working on a craft or does something that would have taken a rigorous amount of practice. I’m fortunate to be surrounded by many friends here most of whom have a skill or skills that are intrinsically part of their personality.
“From visual artists, actors and musicians to sportsperson and business folk achieving recognition for their craft and coming from Ireland especially Northern Ireland, we have a wealth of people to look up too…….but me personally its Bob Ross.”