One could be forgiven for mistaking the Eikon Exhibition Centre itself as a spaceship.

Approaching by car, it looks like it has just landed in the middle of a barren field – a fitting venue, then, to host “Invasion N.I”.

This unofficial fan event, by Ireland’s premier Star Wars club, Emerald Garrison, has been created very much with young and old fans in mind.

As I satisfy the ‘old’ category I thought I should bring along my Lego Star Wars crazy eight year old son to take care of the ‘young’ fan department.

After a freezing thirty minutes waiting in the snaking queue outside, we made it into the cavernous hall. Strains of the unmistakable John Williams score filled the vast space which had been sectioned off with large black curtains.

The entire exhibition was broken into two distinct sections; one for the cosplayers and another for the vendors with the main stage at the end.

We began taking in the eye candy straight away. I kept one eye on my son to gauge his reactions to the number of costume recreations dotted around hall.

Every detailed set brought wide-eyed gasps from him, and a few from me too I must admit. I had wondered before we went if the organisers would have enough to fill the space.

I needn’t have worried. A centerpiece to the exhibition was the full scale “Snowspeeder”, seen on screen taking down AT-AT walkers in “The Empire Strikes Back”.

A queue formed early at this impressive recreation, with people lining up for their chance to climb inside the speeder. This was just one of a number of fantastic recreations, each with sizable queues waiting to have their turn.

I was very impressed with the patience and helpfulness of the many cosplayers who, time and again, stood patiently for selfies and poses; I even managed to persuade “Rey” and “Kylo Ren” to stage a mock light sabre fight for me.

One of my personal favourites was the Doctor Who exhibition. I even asked one of the staff looking after it if someone was inside Davros!

As well as the sets and cosplayers, there was also a large number of stalls selling merchandise from a number of films and shows. 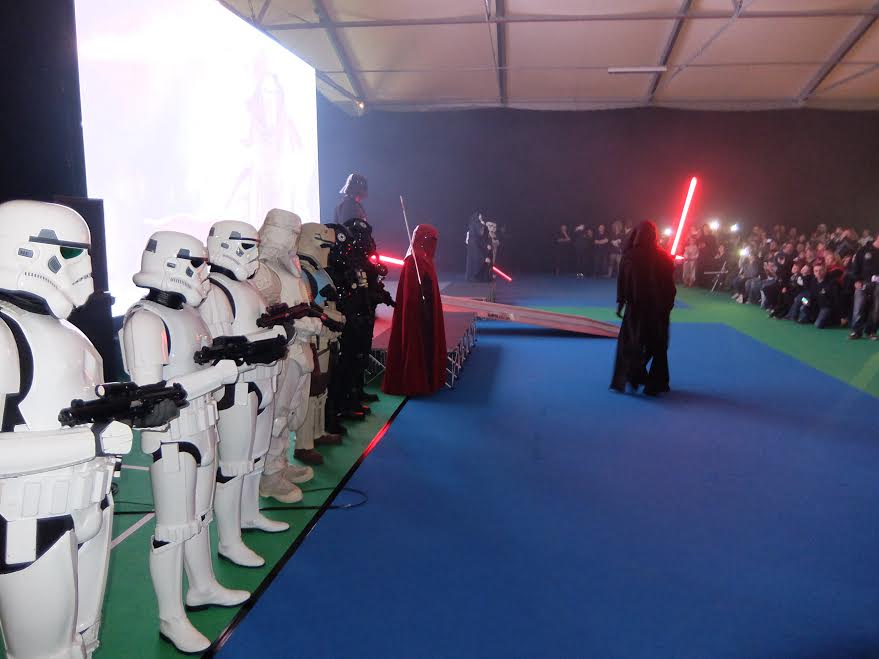 One of the more popular stalls was the Lego stall. My son returned to it again and again. He eventually decided on three Lego figures which he was very happy with!

An event like this isn’t complete without a few actors from the films in attendance. For this event we had Kenneth Colley who played “Admiral Piett”; Mike Edmonds who played “Logray The Ewok” and John Simpson who played “Klaatu”.

They all signed autographs and posed for pictures then made their way to the main stage where they answered questions from the large audience. My son was particularly fascinated by Mike Edmonds, as Santa had given him a Lego Ewok Village for Christmas complete with a Logray action figure.

Another feature was the “Jedi Academy” which taught “Younglings” how to fight and defend with a light sabre. This was very popular. The screams and chants from the kids could be heard throughout the complex.

We spent a good three hours wandering around the various exhibits and stalls and we never felt bored. This was a good indication of a well organised event.

At around 4:30pm we made our way to the main stage, with everyone else, to watch the finale which was a grand parade of all the Star Wars cosplayers.

This was a very well choreographed march to the stage by the main and supporting Star Wars characters.

Something then happened at the end that turned a good event into a great one for me: The Emerald Garrison performed a beautiful and very moving tribute to the late Carrie Fisher and Kenny Baker.

They showed a lovely montage of clips as the Star Wars score swelled in the background. On stage, Princess Leia, flanked by Darth Vader and Kylo Ren, stood in repose as the tribute video played.

I have to admit I did get quite emotional during this and the light sabre salute at the end. This was something I did not expect to feel!

The event, run in aid of “Make-A-Wish”, was a great success and ended on a very emotional note. When I asked my son what he liked most on the way home, he replied: “all of it!”. What better endorsement can there be?