The Black Star Riders have emerged on the other side – the side of living in the shadow of Thin Lizzy: perhaps last year’s festival tour did it.

But when BSR landed in Belfast it was more than a homecoming gig for Ricky Warwick, it was when the Riders emerged as a real force in their own right a band whose tunes were known to most of the crowd in a packed Limelight1 on Sunday night (5th March) in the city.

Before the main attraction two familiar acts had the Ormeau Avenue not just warmed up, but ready, to coin a phrase, to rock.

The power trio of The Amorettes have been faithful in keeping Northern Ireland on their tour itineraries with dates in the Diamond Rock Club, with Europe in the Ulster Hall and supporting Danko Jones.

The result was that with every track the crowd was familiar with the riffs and choruses, so when it came to the crowd pleasing ‘Hot and Heavy’ concluding the set the majority present responded to the call and joined in with every request to shout out the chorus.

For sometime Gun have threatened to really breakthrough beyond the hit cover of ‘Word Up’. But when they came on to the Limelight stage they were welcomed with a warmth and genuine affection.

In turn the Scottish five piece delivered a concise set with songs such as ‘Better Days’ and ‘Hold Your Head Up’. However, ‘She Knows’ from their forthcoming autumn album stood out as a teaser of what looks to be a promising 2018. The inclusion of the Beastie Boys ‘Fight For Your Right (to party)’ was on the other hand not best advised.

With a growing sense of anticipation in the audience Black Star Riders arrival on stage. As the sirens sounded a loud roar of approval greeted the title track of ‘Heavy Fire’. For their new material to be greeted so warmly was a tribute to the progress BSR have made. 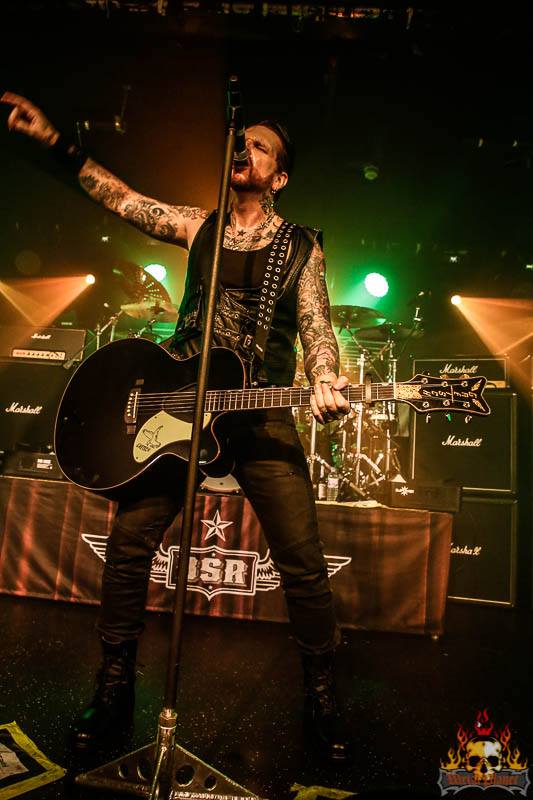 The mid-paced majesty of ‘Cold War Love’ was just one example of how Warwick and Johnson have crafted the newer songs to a standard, a higher standard, than many can – or wish to – achieve.

Only one Thin Lizzy song was included in the set (‘The Boys Are Back In Town’) which says a lot about how the band has developed in their own individual right.

Their three albums gives them a range of songs that have become familiar. ‘The Killer Instinct’ and ‘Hey Judas’ sees the majority join in the choruses with gusto, while the introduction to ‘Soldierstown’ was greeted with a truly emotional response.

The band’s interaction with the audience produced a genuine warmth, and even the obviously well rehearsed speech from Warwick about how vinyl and CDs represent a legacy to pass on to our children didn’t sound clichéd.

‘Testify or Say Goodbye’ and ‘Bound For Glory’ were high points and, yes, this was Black Star Riders ‘Finest Hour’ to date.

This is a band that developed amidst a public glare, with some controversy lingering in their early days. Now, with their third album achieving significant sales (and even BBC Radio2 airplay, much to Warwick’s self-deprecating amusement) Black Star Riders are on the verge of being in the hard rock Premier League.

One feels that the idea of support slots on arena tours with the likes of ageing acts are now a thing of the past. Once BSR complete this tour and the summer festival appearances Black Star Riders will exceed and surpass what they themselves might have expected.

And, no-one should be ‘Blindsided’ by the success they are due.