The artist, whose distinctive voice defines an era of musical era, will also play the Cork Opera House on October 27 and Dublin’s Olympia Theatre on October 28.

On June 16 Moyet will release her latest album Other with Cooking Vinyl.

She said: “For me, making a record at this age, lyrically, is a different proposition. Observation in most cases replaces emotion. The invisibility of middle/aged woman rather thrills me and instead I  watch.

“Subject matter covers what you might expect from a pop album. Dyslexia, locked-out syndrome, diversity, Persephone, doggedness and the Internet. Always asked what a song is about, I attempted to cooperate, but in truth though the lyrics incorporated my best attempt to describe what I see and of the meaning that is mine.

“I want, who chooses to, to find their own landscape or indeed none. Some of us have always felt ‘Other’. I no longer wish it were otherwise.”

Despite Alison’s professing of age, the music bursts with clarity, vitality and freshness, whether in the zingy Lover Go, chic laid-back soundtrack-style The English U, Beautiful Gun’s nod to her rock and roll roots, the icy Germanic arpeggios of Reassuring Pinches or ambient, spoken-word poem April 10.

The hauntingly fragile and sparsely presented title track Other, accompanied by a hypnotic video directed by Steve Gullick, is available as an instant track download when pre-ordering the album.

Other finds Alison at the top of her game – making exactly the adventurous electronic pop music she wants to at this moment in time, with her voice and songwriting both intense, poetic and thought provoking. Other was catalysed by Alison’s fruitful dalliance with producer and song writing collaborator Guy Sigsworth, who (as well as having worked with Björk, Goldie and Madonna), co- created her last album ‘the minutes’, which debuted at # 5 in the national charts and won critical acclaim. 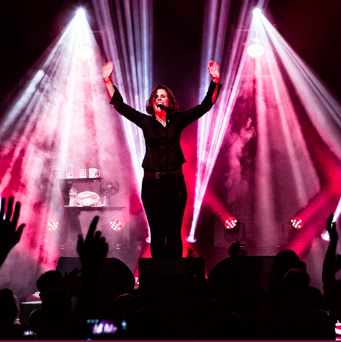 The new long player features backing vocals from Alison’s daughter on The English U, which was preceded by her guest appearance on stage at Alison’s Royal Albert Hall show, and an appearance in the video for When I Was Your Girl (from ‘the minutes’).

In addition to Alison studying sculpture at college whilst also creating this new release, other happenings of note since ‘the minutes’ include receiving an Icon Award at Nordoff Robbins Silver Clef Awards, a hot ticket performance with a 32 piece orchestra at Burberry’s London Fashion Week womenswear show, and her involvement in the RSC’s celebration of Shakespeare’s 400th anniversary where Alison composed and performed a new arrangement of Sigh No More Ladies (from Much Ado About Nothing) in their BBC 2 live special.

They are also available in person from 100 Ticketmaster Outlets Nationwide, calling 0844 277 44 55 or from www.ticketmaster.ie