Since the pandemic started, much of retail has bounced between being open and closed, impacting footfall significantly. To make meaningful comparisons to changes in footfall, all figures since March 2021 are compared to their pre-pandemic levels (year-on-2-years, Yo2Y), rather than year-on-year.

According to NIRC-Sensormatic IQ data:

“Shopper footfall in Northern Ireland fell in February, compared to the same period prior to the pandemic. This was an underwhelming performance after three or four encouraging months and given the rescinding of Covid restrictions in the middle of the month. That said, the dip wasn’t uniform across all destinations as shopping centres saw a modest improvement during the month.

“Concerns about the cost of living may well have exerted a downward pressure on visits to stores. However, these figures do underline the protracted nature of the recovery and the need for continued support from policy makers particularly in the short-term to encourage and entice shoppers back. With much of our wider economy ultimately dependent on what happens to consumer spending it is crucial that the election manifestos of the political parties take a coherent approach to supporting the industry and the customers it serves.”

“While February’s shopper traffic fell back in Northern Ireland, the total footfall across the UK still leads the top 5 European markets’ footfall recovery, suggesting a collective growing confidence among shoppers.  With UK Governments announcing the further easing and ending of covid restrictions, this represents what many, not least retailers, hope will be the ‘beginning of the end’ of the covid crisis – our latest data shows consumer concern about in-store safety fell by -18 percentage points year-on-year – however, shoppers now face new and growing pressures.  The cost-of-living squeeze and inflation, which is putting downward pressures on disposable income, and a volatile macroeconomic and geopolitical climate could create a perfect storm of uncertainty for consumers, which could still impact the long-term retail recovery as it looks to build back post-pandemic.” 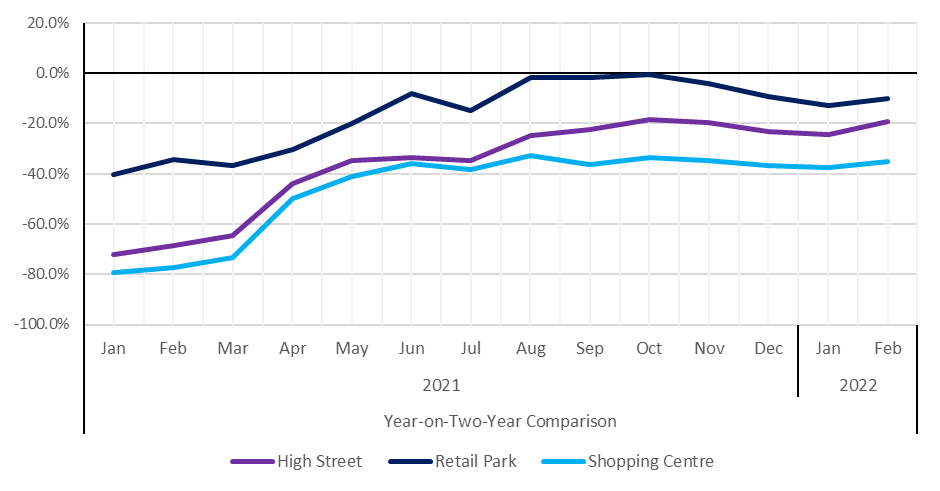