In the sleepy coastal town of Whitehead in County Antrim, 24-year-old Sophie Grier sets up her phone to record another whitty 30 second TikTok video for her audience of over 500,000 before heading off to perform Voulez-Vous to a crowd of devoted ABBA fans.

However just 18 months ago, Sophie’s dream job as Frida in one of the UK and Ireland’s most successful ABBA tribute groups, The Bjorn Identity, took an unexpected turn when Covid struck and she was left with no choice but to part ways with the arts.

Left feeling isolated and uninspired, Sophie turned to TikTok, the popular video sharing app to fill a temporary void but little did she know her uplifting videos would end up captivating audiences around the world.

“In early 2020, an ABBA tribute group was looking for a new member, and my singing teacher recommended me. I auditioned, got the job and was delighted but within a month we were propelled into a global pandemic”

“When lockdown happened my career didn’t really exist anymore. I used to be a teacher and a full time performer so my life has always been music and filled with creativity so I eventually gave in and downloaded it, got a bit addicted and started making videos for fun.”

Over 8 million likes later, it’s clear to see why Sophie has built up a loyal following who tune in daily to get a glimpse of the ABBA star’s infectious energy, a concept she still can’t quite get her head around.

“Making TikToks was really a way for me to be creative when everything else had shut down. I didn’t really expect anything of it and then a video managed to get millions and millions of views.

“I think my most viewed video is 9 million which is crazy. Suddenly more and more followers joined. People have been like “That’s the girl from Northern Ireland that sings in her car. And she quite likes ABBA’” 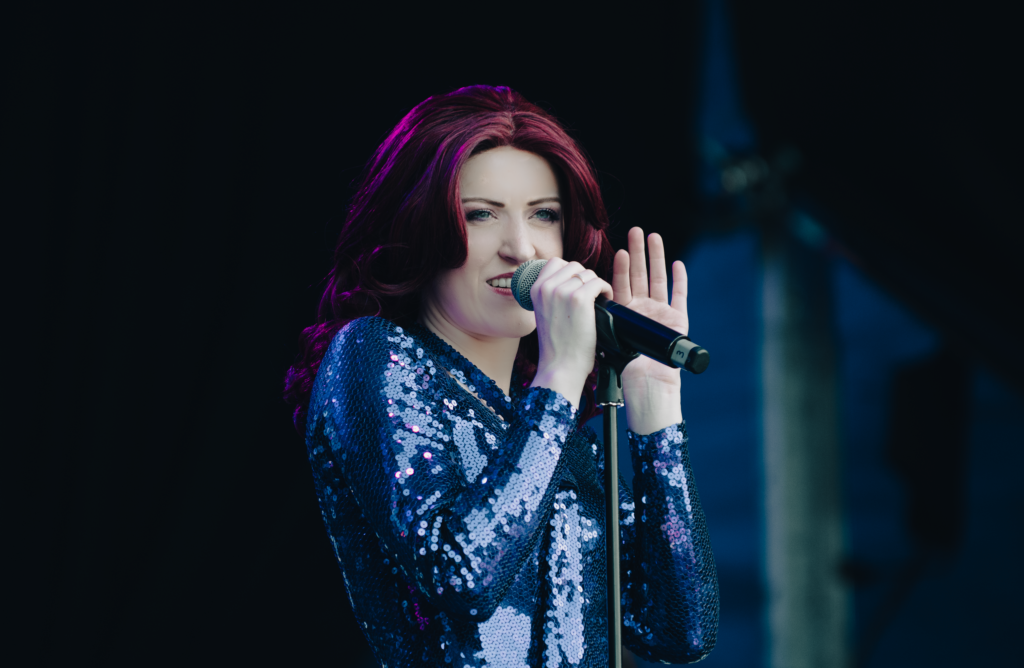 When she wasn’t Tiktoking, Sophie spent lockdown immersing herself into the star studded world of the Swedish pop group, a task she recalled as more difficult than she’d imagined.

“I always loved ABBA so it was really fun to get to study it but it actually was like studying another language; learning how they pronounce the different words, watching so many videos of all their performances to study moves because I want to make sure that I’m giving the most accurate, authentic performance that we can.

“We don’t want someone to come to our show and go “They sang some ABBA songs”, we want them to feel like they were actually watching an ABBA concert. When you’re onstage then, you’re not onstage as you. You’re onstage as a character, almost.”

“It’s a challenge that we love to better ourselves and make sure that we are giving the best performance that we can and that it is as close to the real thing as we can possibly make it.”

Turning every corner of her family home into a makeshift rehearsal studio, time was ticking for Sophie to finally get on stage to showcase her new role as Frida in the pop quartet.

“We spent hours rehearsing over zoom but as the time went on, it did get more and more frustrating because everyone else seemed to get back up and running; we were seeing football games, we were seeing all these other things but live entertainment was always the last thing to come out. We had so many false starts.”

With no sign of Covid slowing down, The Bjorn Identity were forced to wait a year and a half until they made their mainstage debut at Dalfest in the grounds of Glenarm Castle in July 2021, an evening Sophie looks back on fondly.

“It was a very long wait but it was definitely worth it. It was a bit of a baptism of fire. It was great fun and a good way to relaunch the band after a hiatus.”

“I’m going back out to America this summer to teach summer camp and with the band we’re very busy. We’ve got the Millenium Forum in May, Dock Square and then we’re opening for Martin Kemp in the summer.

“Working on shows, directing, teaching the kids and being out performing with the band every weekend, I am very grateful, I’m very lucky and I’m really excited to just appreciate every moment of it.”

For those close to Sophie, she revealed how they are ‘nothing but supportive’ of her unconventional full time job.

“To me it’s quite an amusing job to tell people I’m in an ABBA tribute band, so a lot of people kind of go “Oh, right okay.”

“Everyone around me has been very supportive and happy that I’m out doing something that I love and getting to spread happiness and just seeing people’s faces when ABBA comes on.”

Recently voted No.1 Tribute show in Ireland, fans can expect a show packed full of excitement and exuberance, dazzling costumes and authentic ABBA style choreography which will take the audience on a journey back to the 70’s.

Featuring all of ABBA’s famous hits alongside lesser known tracks for the fans who want an extra dose of the Swedish sensations.

“I just love looking at people having a great time, especially when it’s because of something that we’re doing. That’s a great feeling to know that you’re able to bring joy and happiness to others through what you’re doing.”

Check out thebjornidentity.co.uk for more information on The Bjorn Identity’s upcoming shows.